Living in Canning town and Upton Park in my teens, my exposure to fine dining was limited to the chicken and chip shops ( Ocean Blue and Perfect fried chicken ) and the occasional Chinese fried rice with duck and chillies from our local restaurant . My friend and I ( Herman) spent a substantial amount of time in these shops, getting takeaways in preparation for another night of football on Tv. On one of these nights , a show called Masterchef the Professionals came up on BBC in 2008 and it just opened my eyes to the world of fine dining. The main judge at the time was the amazing Michel Roux Jr , Chef patron of the world renowned Le Gavroche and his scary Sous chef Monica Galetti ( she now smiles on the show ).  He championed French cooking during this programme and constantly demanded perfection from the contestants .The joy on his face when someone finally served a dish he thought was close to perfection made us grin like a bunch of geeky fan boys . We always dreamed about having Dinner at Le Gavroche one day. 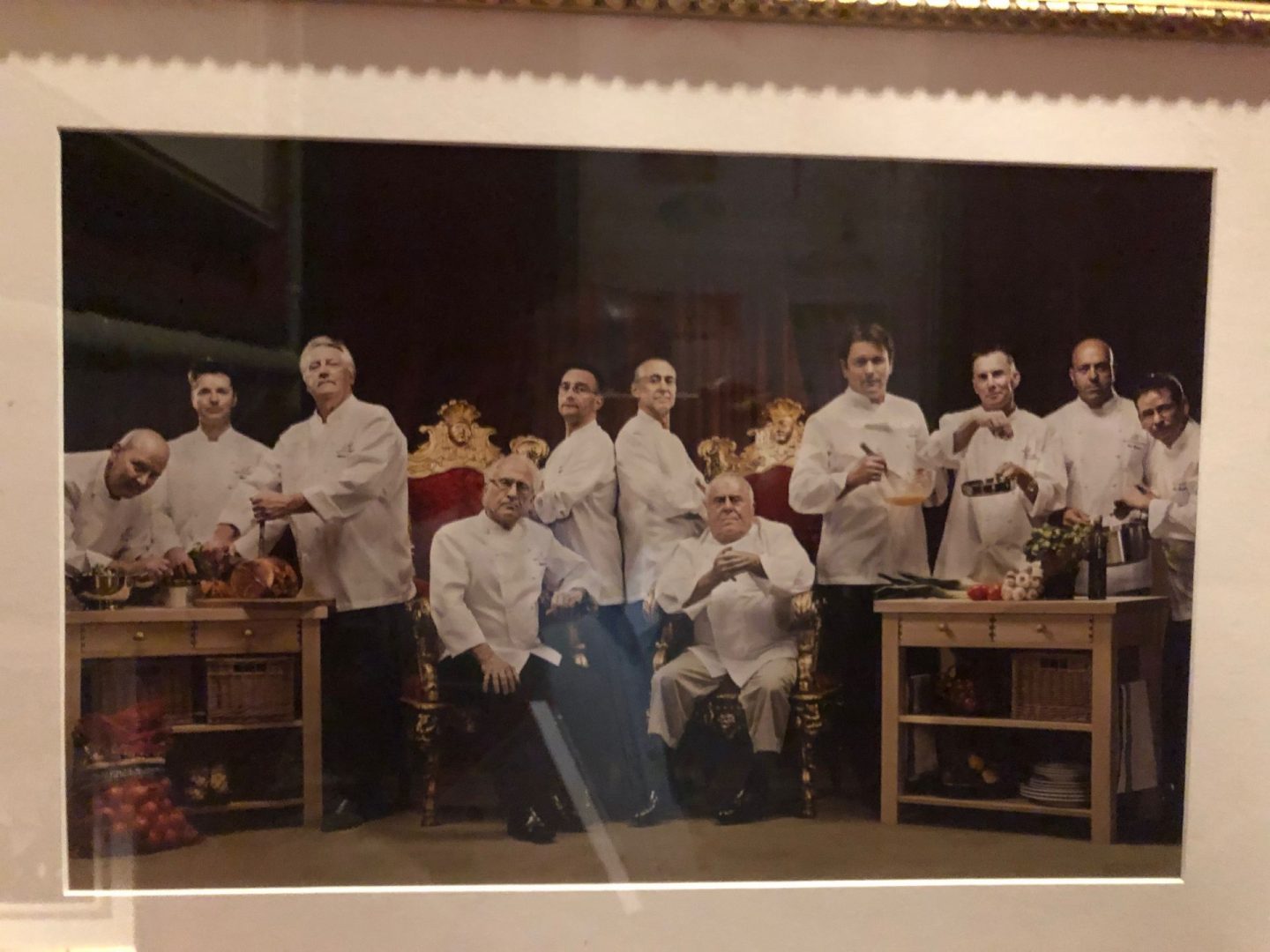 We wanted to find out more about Michel Roux Jr because his passion for food really stood out from the rest and we quickly realised there just wasn’t one Roux, there was many and they all loved food. His dad and uncle , Chef Albert Roux and  Michel Roux senior had the same fire in their eyes when they spoke about food. Soo many great chefs passed through their kitchen doors. The name and calibre of chefs they taught and inspired over the years was jaw dropping.   I started visiting a few restaurants ( the ones I could afford ) after this and quickly developed a liking for French cooking . Don’t get me wrong, I love dishes from every corner of the globe, however French food is my favourite . I love the richness and depths of flavour you find in French cooking. My brother ( bless his soul ) and I used to spend time in Borough Market buying the freshest  Poulet de Bresse for our Sunday roast.  Many nights were also spent in a restaurant in Paris ( Le petit pontoise ) stuffing my face on the finest pan fried Foie Gras , Veal and roast duck dishes washed down with a house red.

A few months ago a message popped up on my phone and it said  “Dinner at Le Gavroche for 2 at 6.30 pm on the 6th of Feb 2020″. I let out a squeal and told Elisha how happy I was as Michel Roux Jr’s Le Gavroche was the number 1 restaurant on my foodie list. Every restaurant I visited ( apart from Restaurant Story ) after I received the booking confirmation 2 months ago was just a formality to be honest . This is the one restaurant I really really wanted to visit .

The day finally arrives. I woke up and called Elisha, gently reminded her not to wear trainers. ” are you saying I only wear trainers to nice restaurants Michael?  ” was her reply. I know a trap question when I hear one, so I quickly got off the phone before I got blasted for my rudeness. I went to work , but my mind was elsewhere . I gave into my excitement and finally decided to tweet about my upcoming dinner at Le Gavroche. Lo and behold a tweet came back from Michel Roux about my Roux at  Parliament square blog. He also said he looked forward to seeing us for dinner.  My mind was completely blown and I sent Elisha the tweet followed by the geekiest  call ever … I wouldn’t repeat the conversation. An hour before I left work, I called Elisha again just to say hi ..and to make sure she leaves on time because she is always always late. Death , taxes and Elisha’s “I am 20 minutes late ” texts are certainties of life.

I ran out of work , got to Le Gavroche on 43 Upper Brook street and stood outside for a minute or 2 before I mustered the strength to  press the bell. 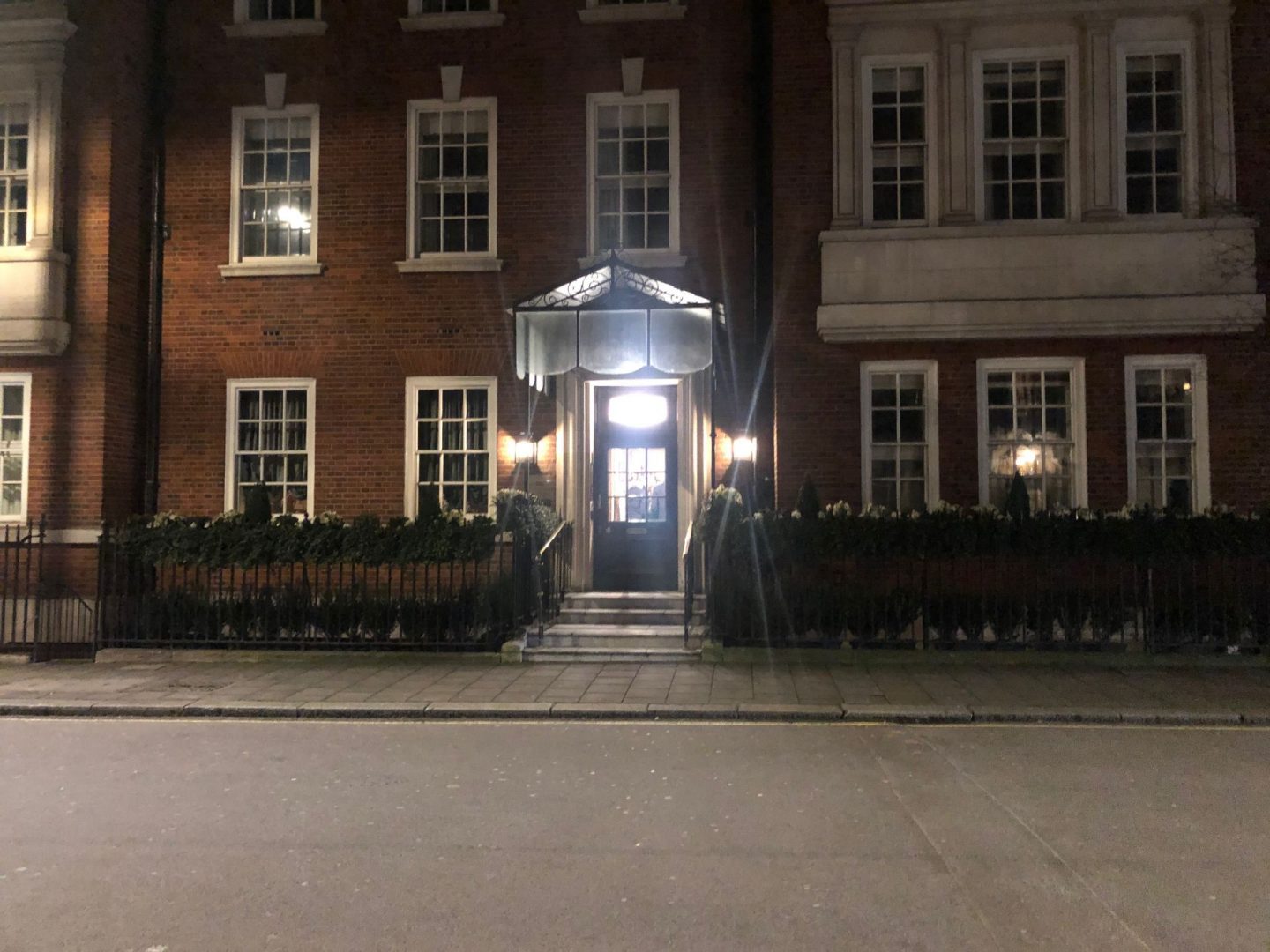 They took my jacket and asked if I wanted to wanted to wait at the bar or go downstairs. I chose to sit at our table downstairs and wait for Elisha. The call came in…” I’m just running 20 mins late Michael”, I smiled , ordered myself a glass while looking at all the various pics hanging on the wall of the restaurant. 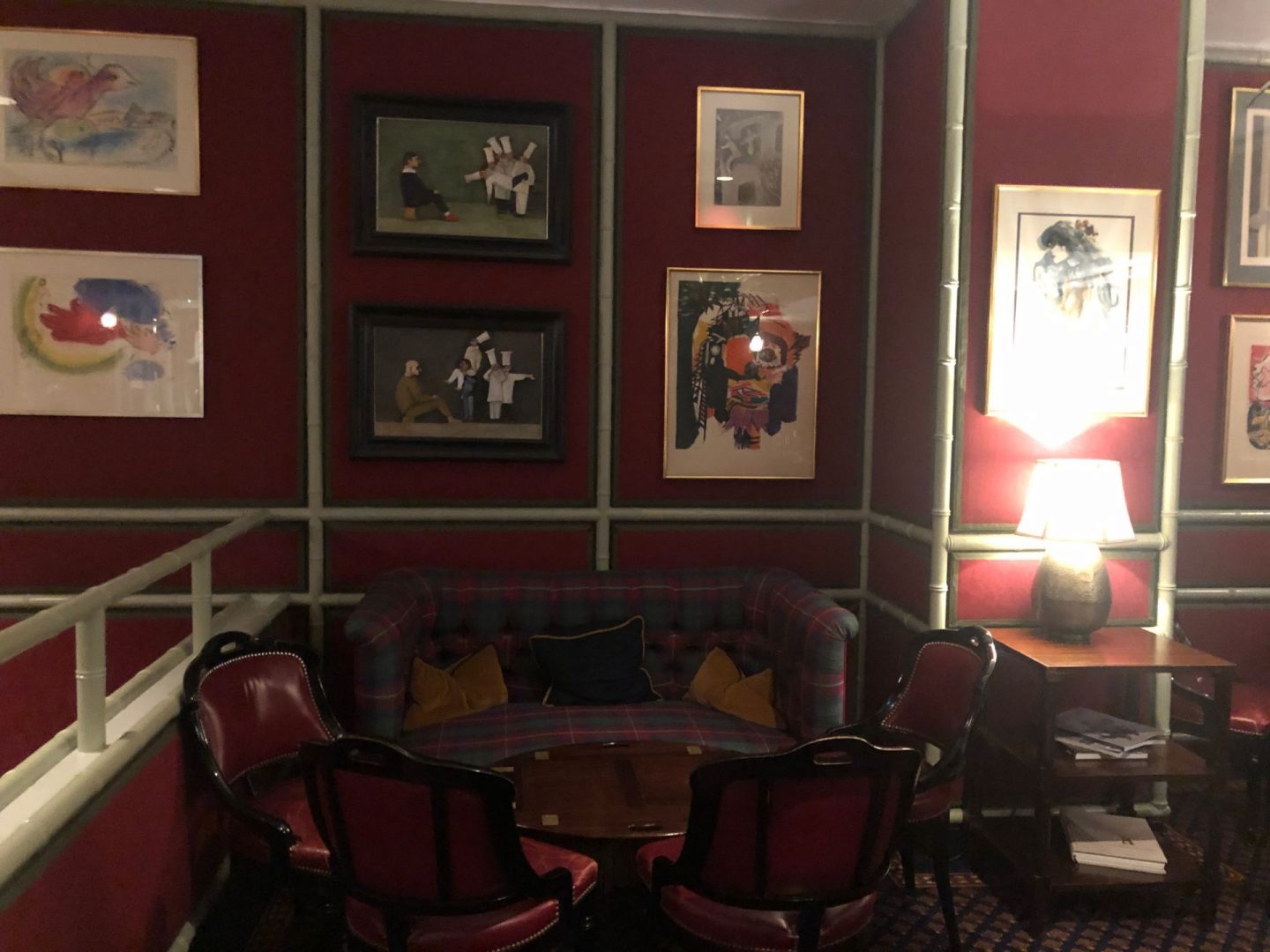 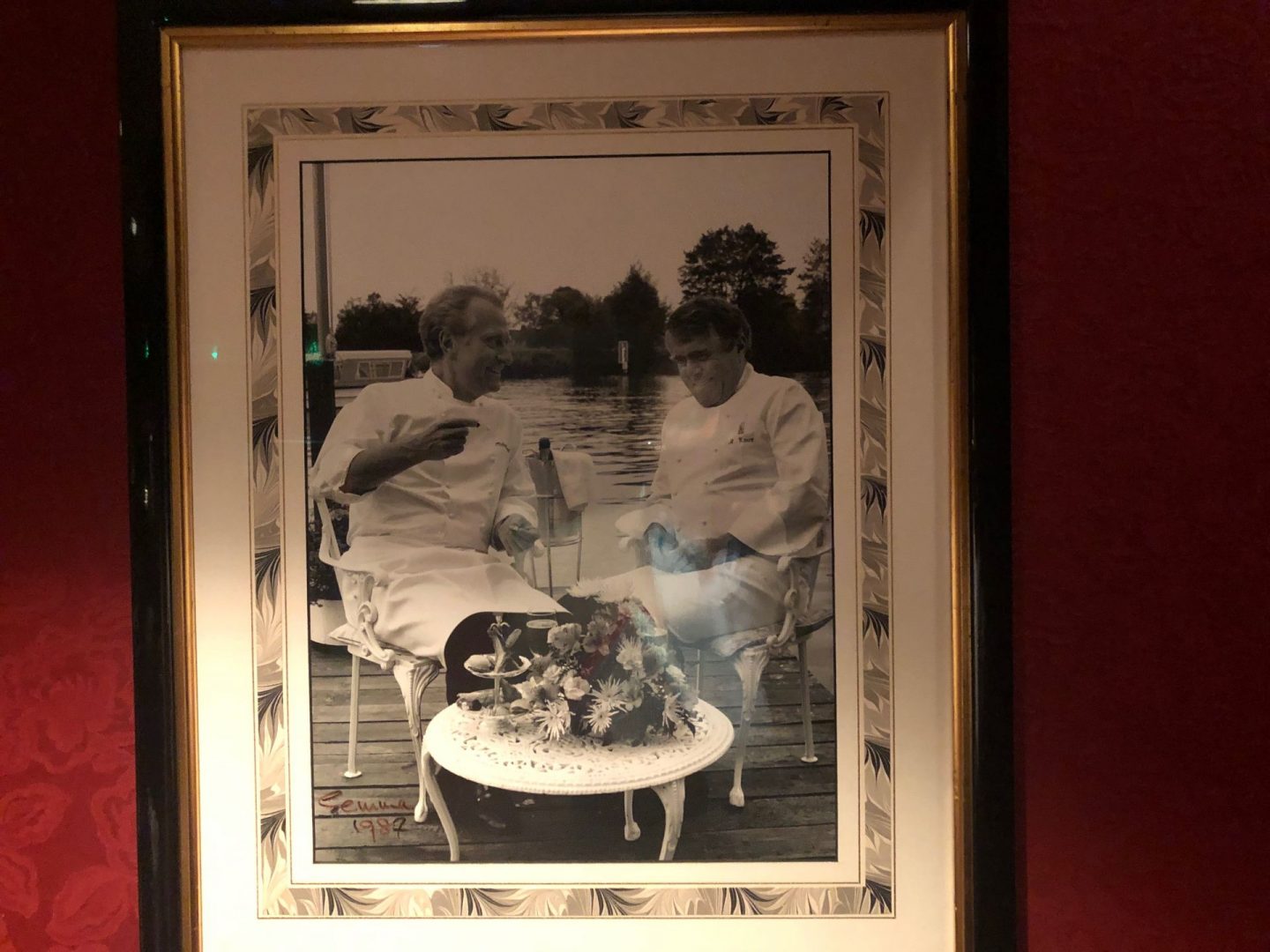 Little foodie trivia, did you know Le Gavroche was the first restaurant to receive one, two and three Michelin stars in the UK? . Now whilst I think that is something to be proud of , I don’t think they are defined by the stars. I think the whole ethos of the restaurant after last week’s meal was simply to serve dishes that that was joyfully delicious and comforting. 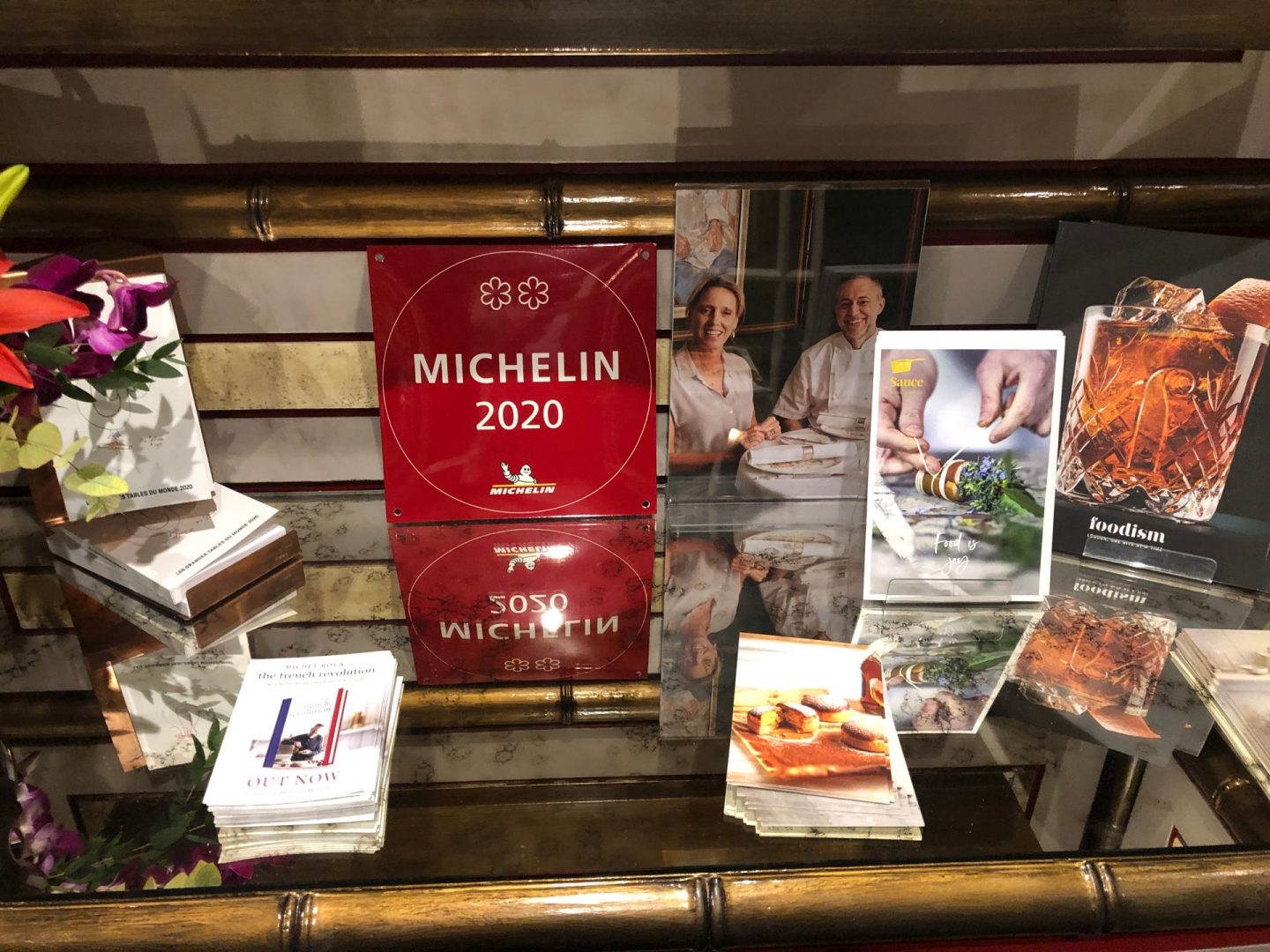 I ordered a starter and main from the friendly staff as soon as Elisha arrived. We spent the next few minutes admiring the Le Gavroche plates, searching online to see if we could get a couple , but alas we couldn’t find any on the Le Gavroche website.

The original and classic cheese and double cream Soufflé starter we ordered on the menu was apparently one of their oldest dishes. It was very very light and very moerish. It’s without a doubt the best cheese dessert have ever had and possibly one of the best desserts on the planet . I can see why they kept it on the menu all this while. That souffle is timeless

I ordered veal and foie gras for my mains , while Elisha ordered a milk fed lamb dish. Both mains delivered bucketloads in flavour.

Michel Roux Jr came out of the kitchen for a minute and I thought I just cooly grinned, but Elisha said I apparently jumped out of my chair and screamed ” he is over there ” . He walked back into the kitchen and that was good enough for me. 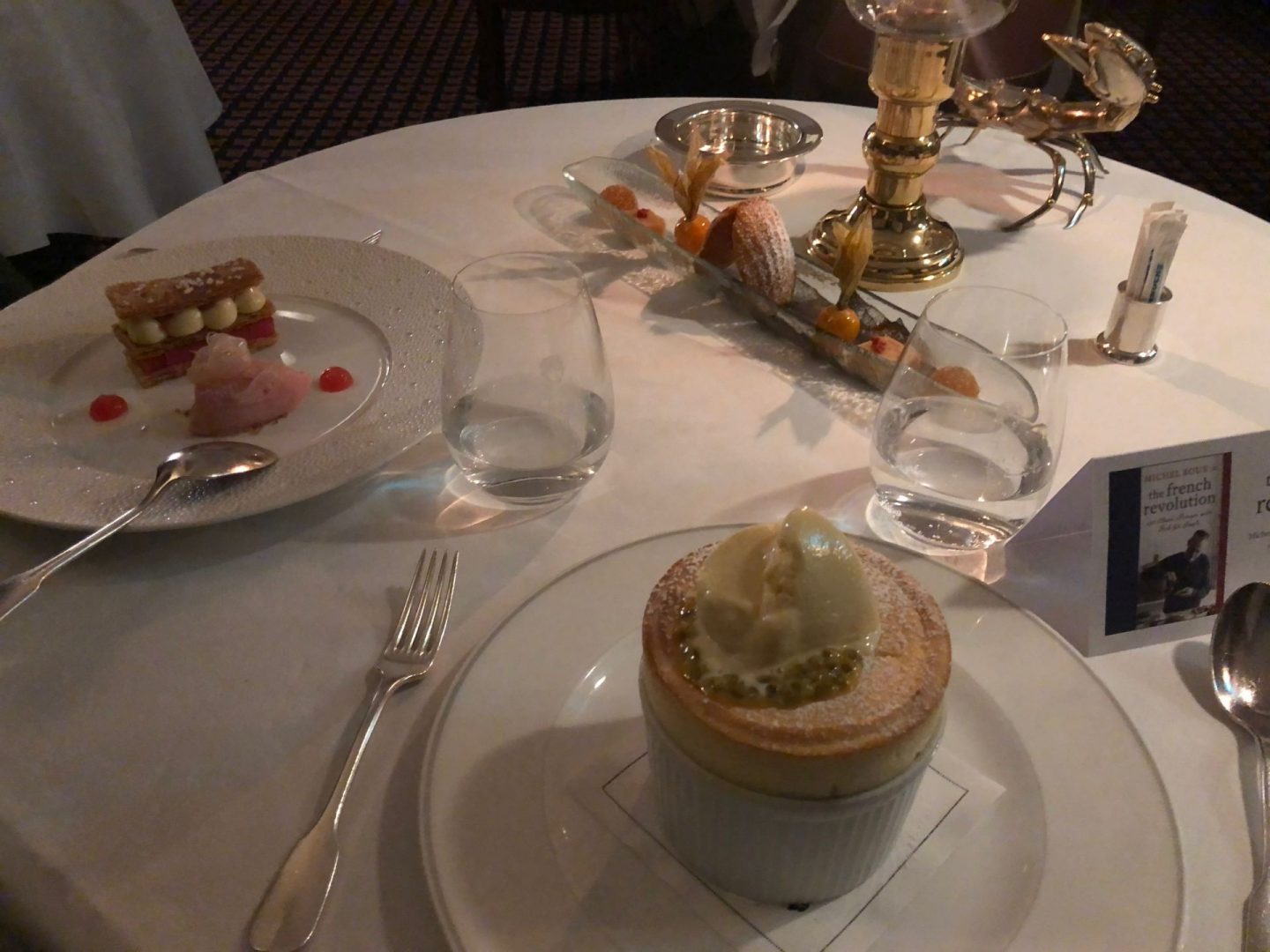 Michel Roux junior came out and joked about my exciting tweet and Parliament square blog post. I mumbled something and tried to tell him how he played a big role in opening my eyes to the world of food but I just couldn’t fully put it into any coherent sentence. I also wanted to ask what his favourite dishes were and why  , what restaurants he loved back home in the UK and what drew him into the world of cooking. The below is a foodies dream come true and my IPhone wallpaper and screensaver

There goes our dinner at Le Gavroche.The ambience of the place was warm , comforting and unpretentious unlike some Michelin star restaurants I visited over the years. The staff were friendly and fantastic . Le Gavroche is still a topic of conversation every evening as E and I plan to spend another evening there quite soonish. I also managed to get one of Michel’s signed French Revolution cookbooks, so here’s to attempting some classical French cooking before my next visit.