I recieved a call early Sunday morning about catching up for brunch in east Croydon so I jumped out of bed got ‘brunch ready ‘and marched towards the high street in anticipation.The brief was to find a place serving a healthy and tasty brunch , however trying to find such a place in East Croydon, south Croydon and central was a nightmare. There are greasy cafe’s around every corner specialising in heart stopping dishes , an array of  Weatherspoon pubs serving  breakfast plates with mushrooms and tomatoes that looks like something grown in Chernobyl and a Box park with breakfast stalls we’ve exhausted no thanks to Uber eats . We walked around for 30 minutes and stumbled on a cafe in Matthews yard just off Croydon’s Surrey street. We spent a few minutes staring at the sign because it said something we weren’t quite used to … The Vegan grill. 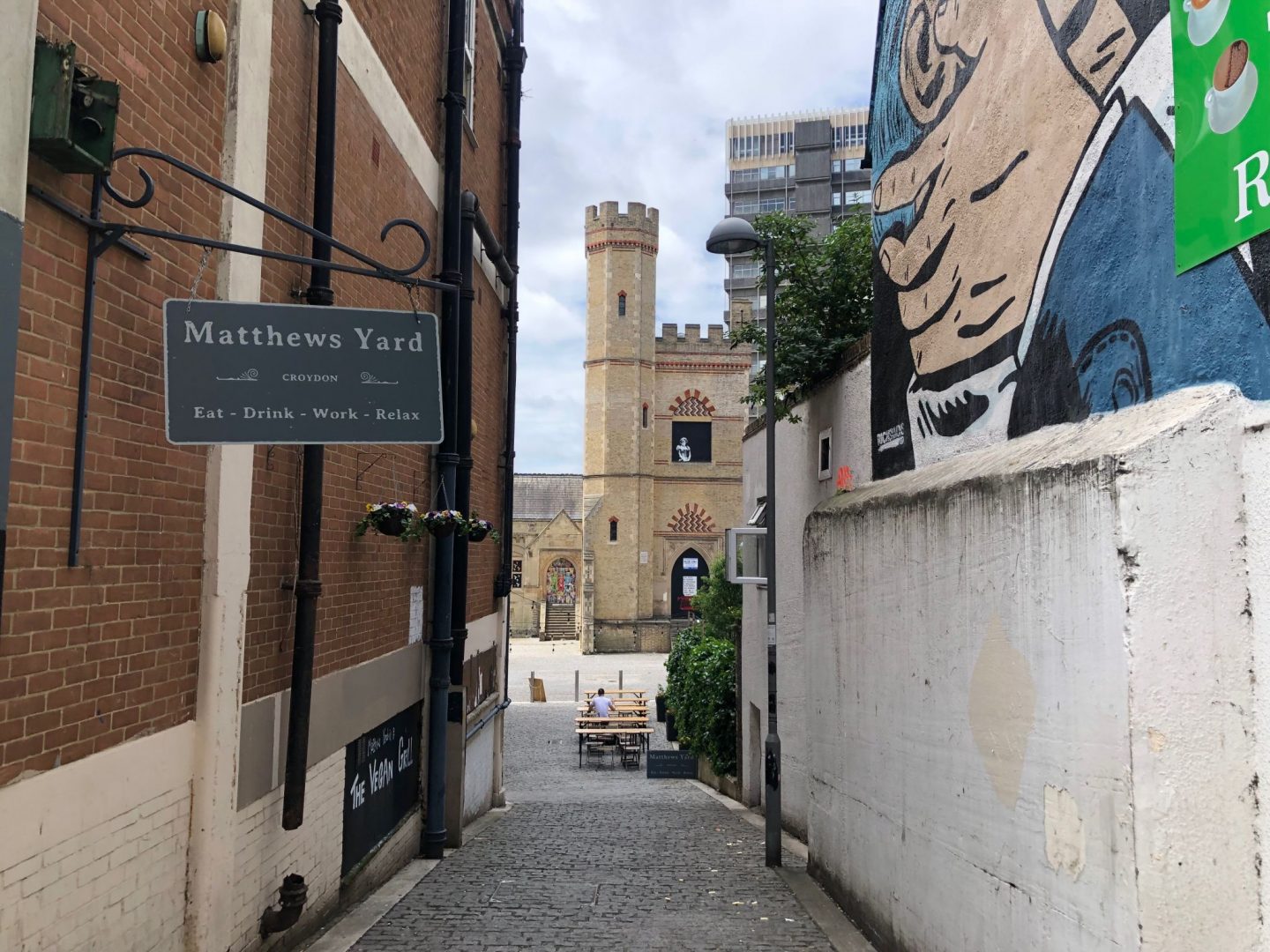 An arts and creative community centre for Croydon folks. It even has a former prison. 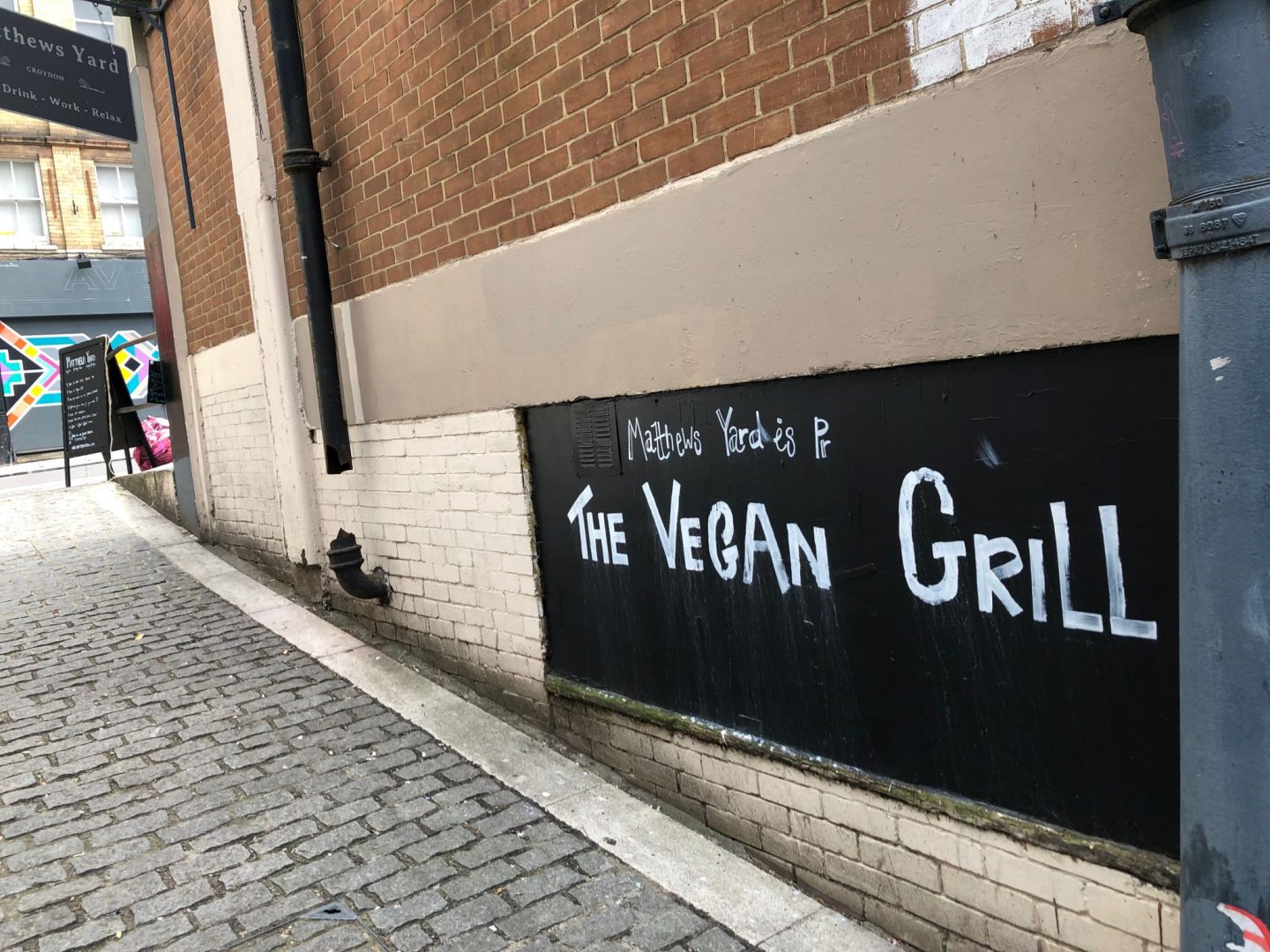 We walked into the cafe , liked the space , looked at the menu and calmly walked back. Yes  it was healthy,  and the plates were set at reasonable prices, however it seemed just a tiny step too far as we weren’t sure it would deliver on the kind of taste we were used to. A few more walks around the block and Elisha said “lets go Vegan or go home”.  We decided on the former and headed back to the cafe for our first Vegan brunch. On entering the place , it was airy , had a calm vibe and just seemed like the perfect place to be after a tiring shift at work. There was a couple playing table tennis and a young boy playing fortnite. This definitely seems to be a place for everyone. 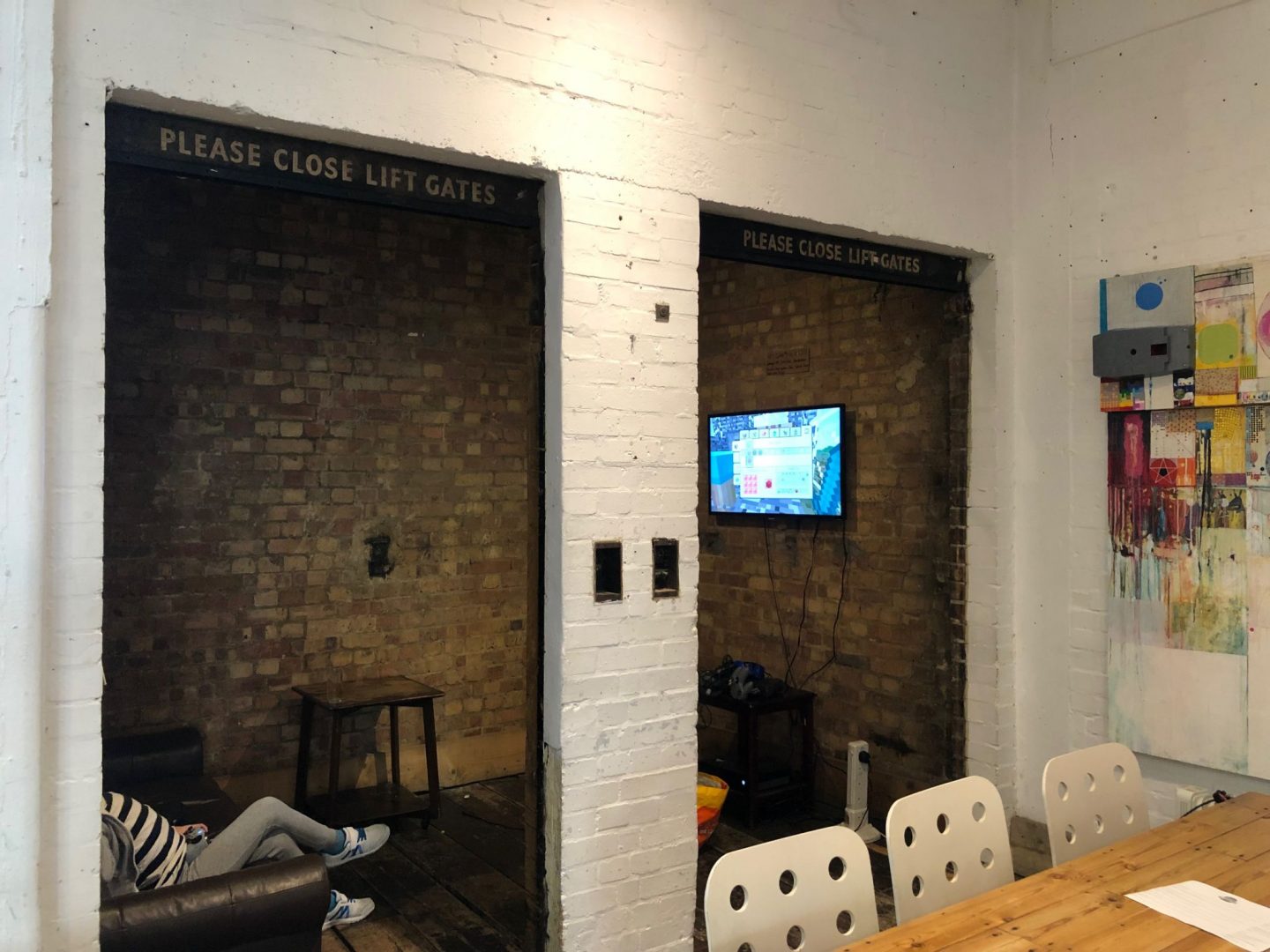 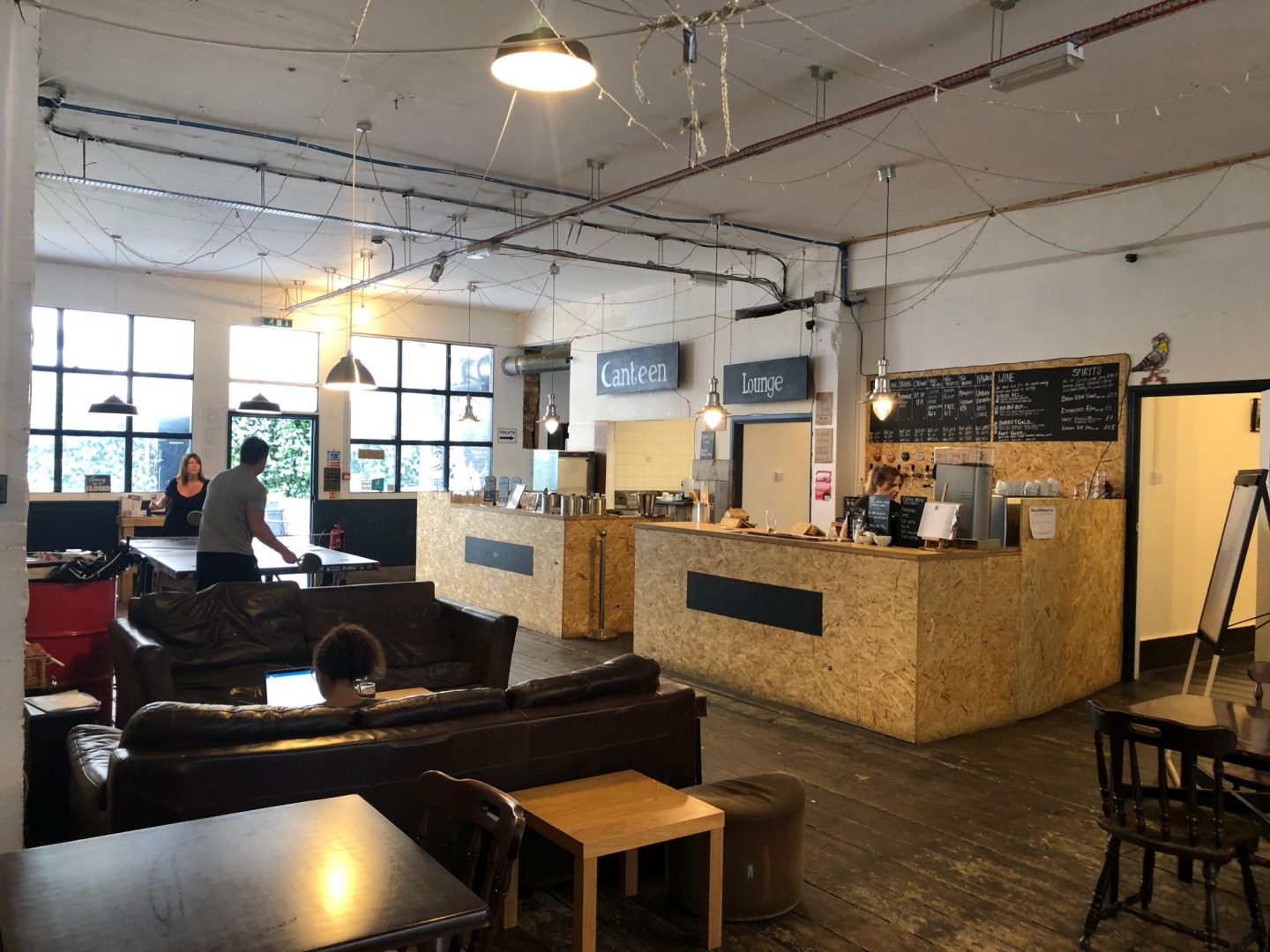 Couple playing tennis. The dude starts losing so he did the next best thing. Tried to make up rules to turn the tide. I think he still lost 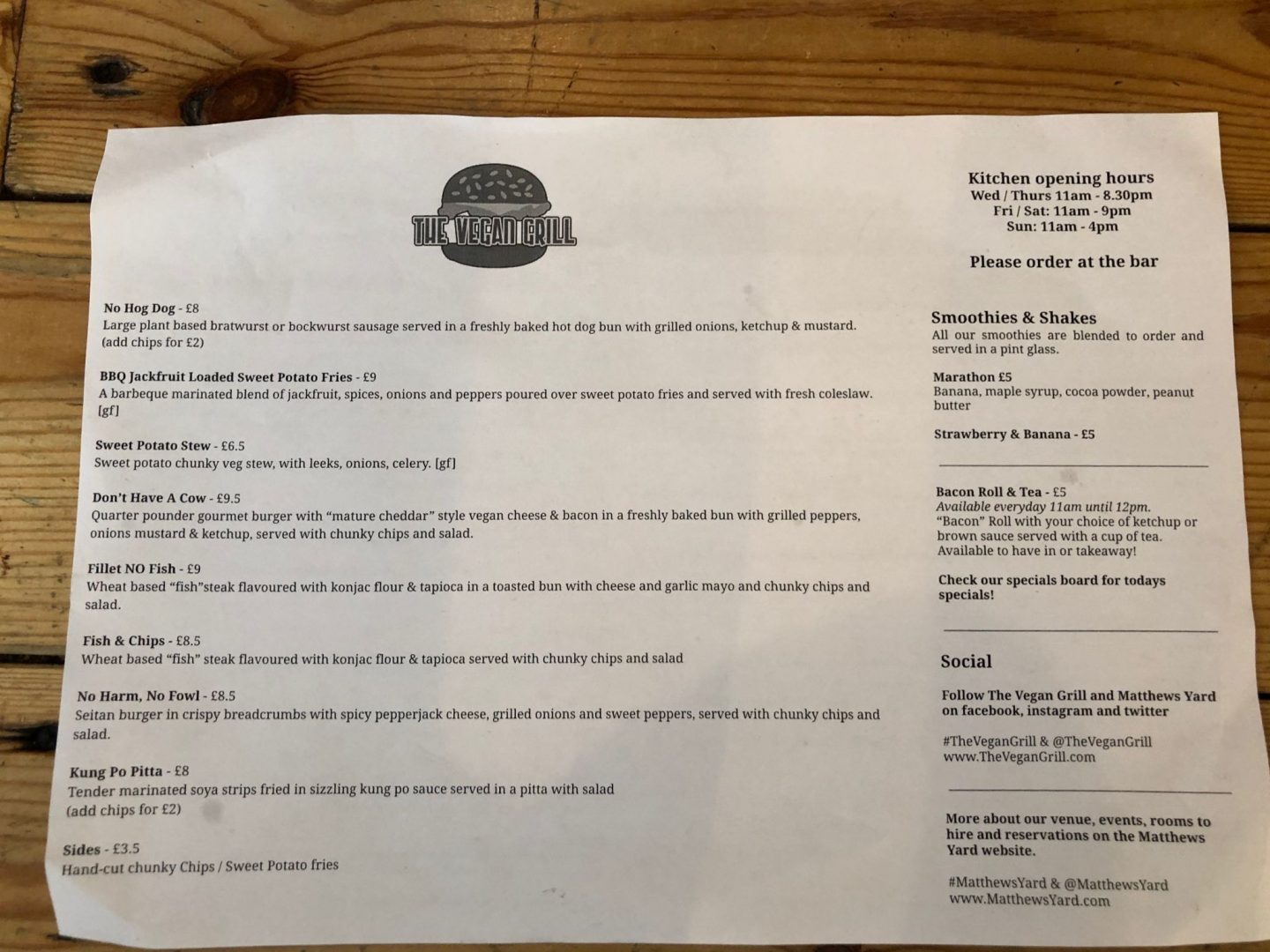 After a few minutes , Elisha went for a sweet potato chunky veg stew with leaks , onions and celery that costs just £6.50. This was a tasty bowl of moreish warm comfort food. The Nigerian in me would have probably added some hot peppers to give the sweetness an extra dimension. That said I would have gladly demolished the stew. 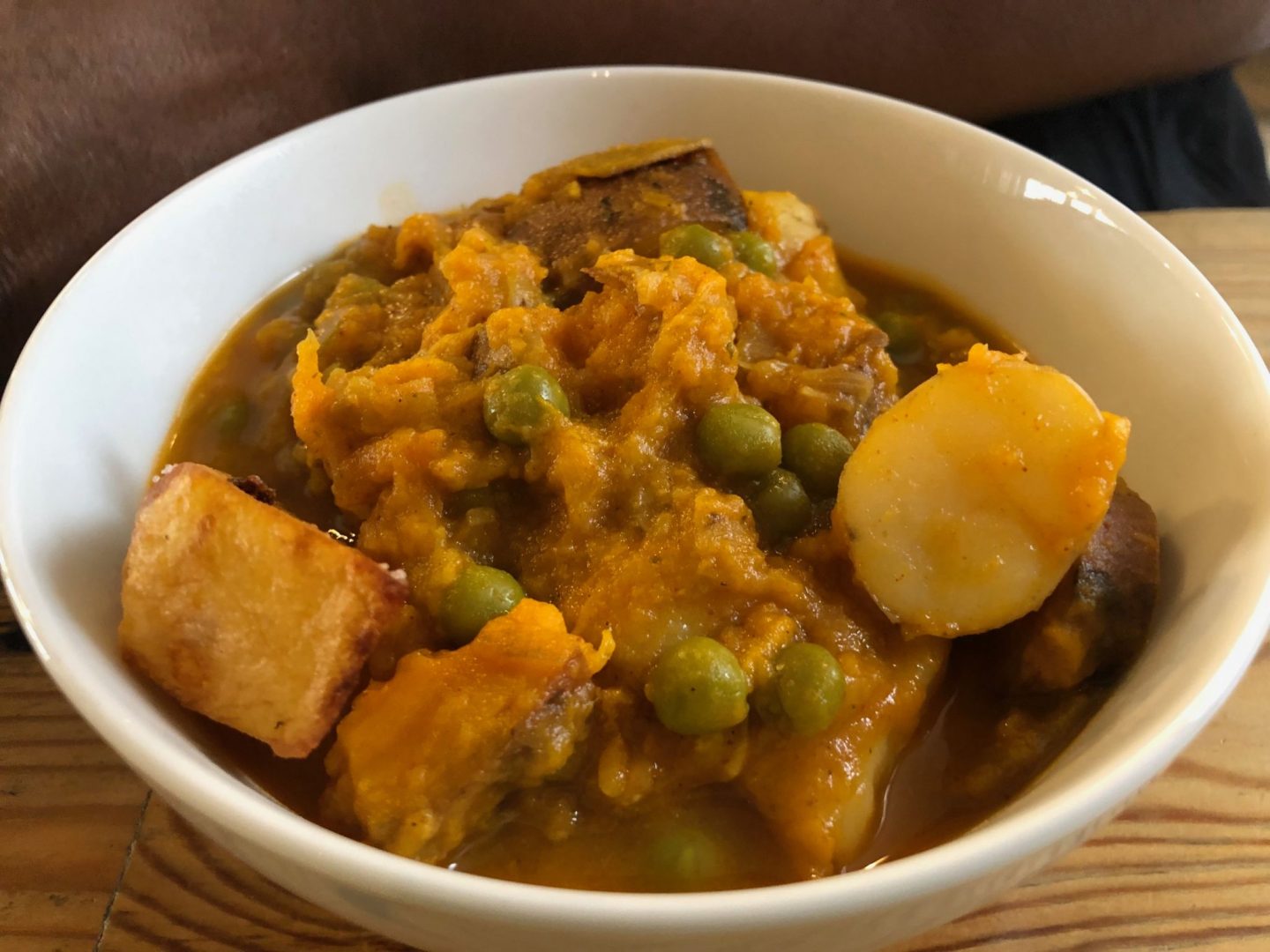 I went for the No Hot Dog, a large plant based bockwurst sausage served in a freshly baked hit dog bun with grilled onions , ketchup and mustard . This set me back £8 with additional chips for £2 extra. 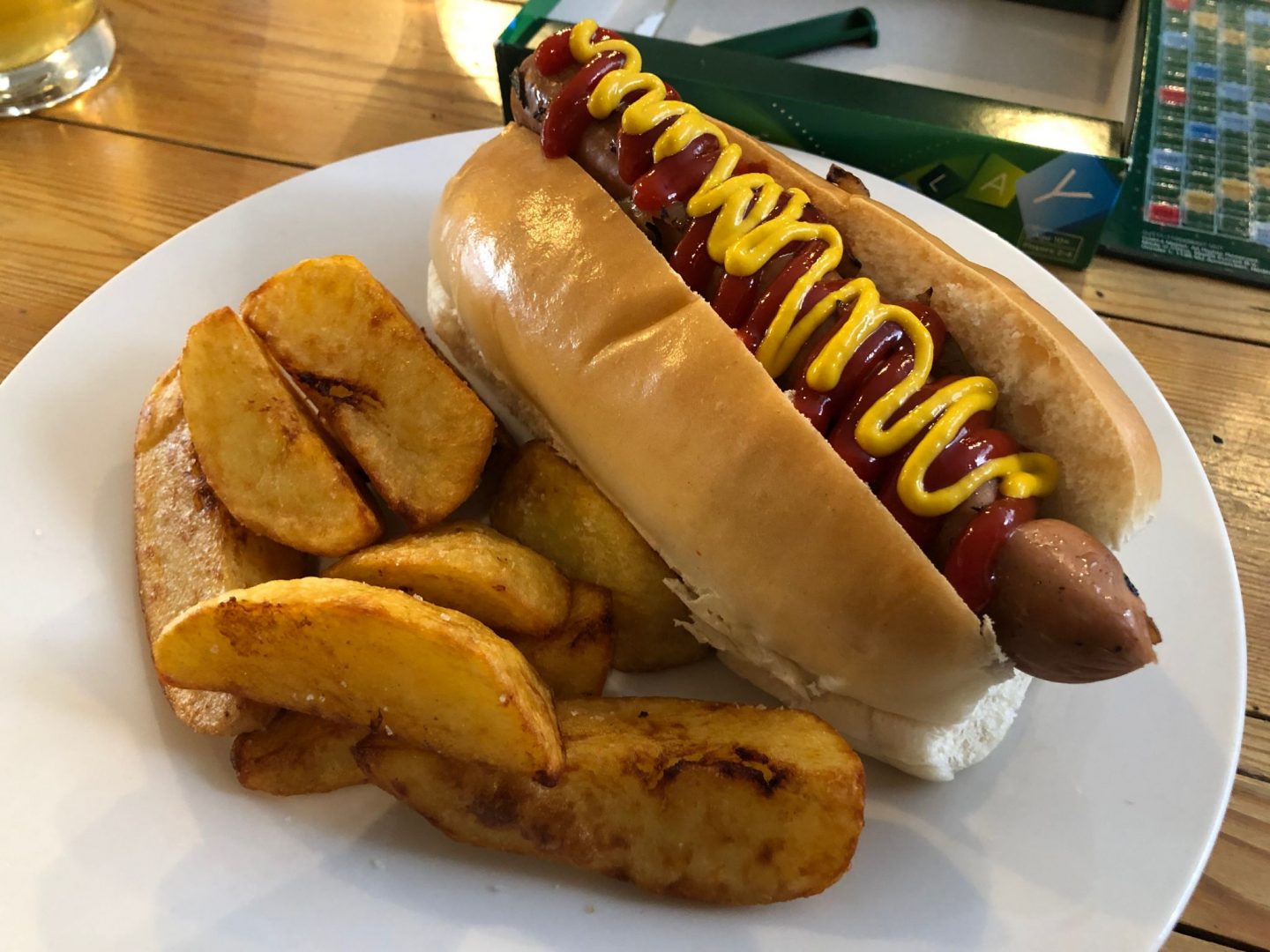 The No Hot Dog : A Plant based sausage

I took a bite of my main meal and smiled to myself. It tasted as good as the sausages I get from shops and stalls with the only difference being not having to play a roulette of guess the meat. I learnt from Ben, the chef that this plant based bockwurst was made from Seitan, a vegan meat substitute made out of wheat gluten. It’s low in carbs and fats , but has a decent amount of protein. I plan to try this out again with an eye on the menus burger and vegan cheese.

Wheat gluten used as a meat substitute at the Vegan grill 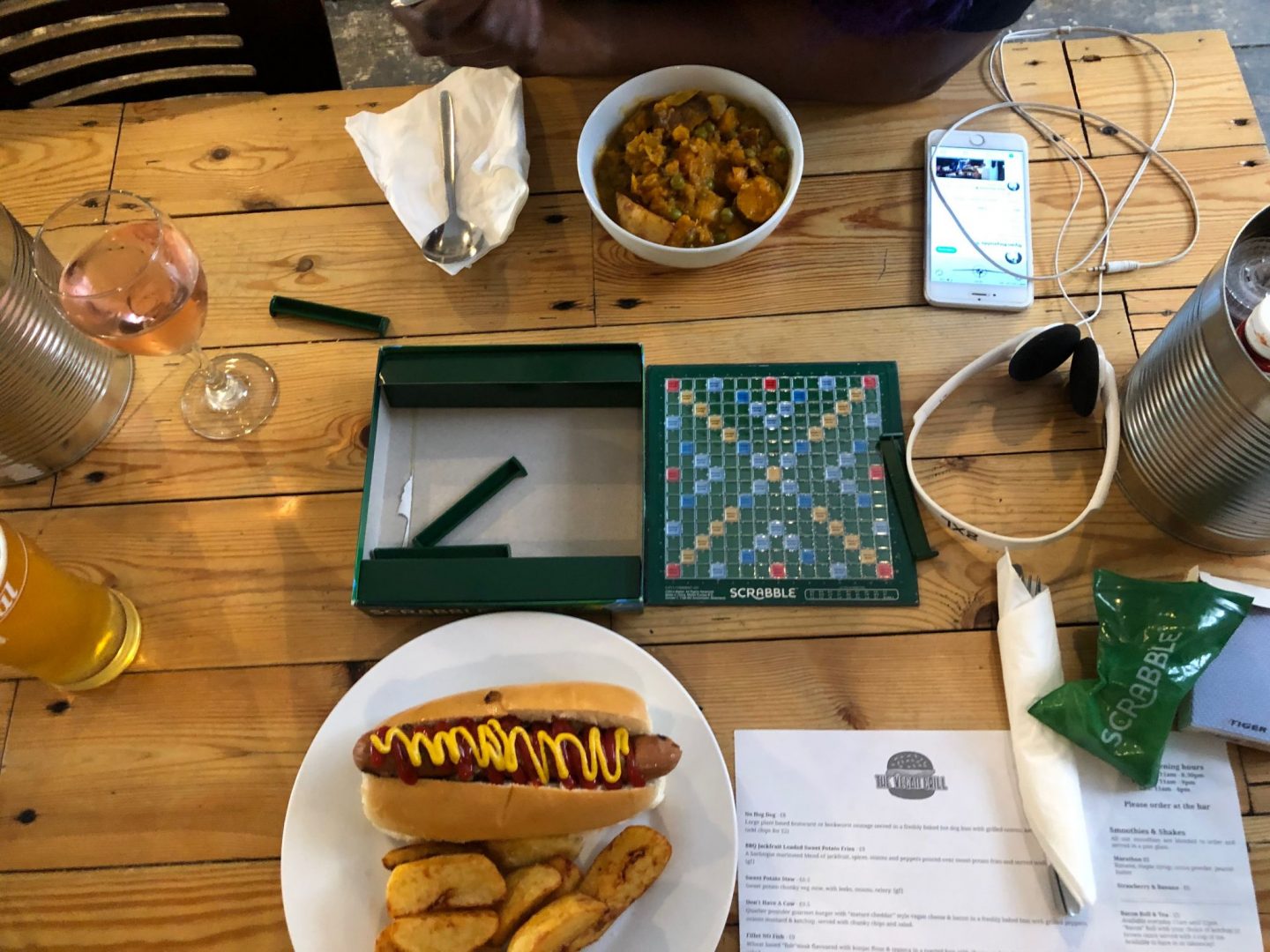 The food was all washed down with lager from a local brewery in Croydon called Signal. 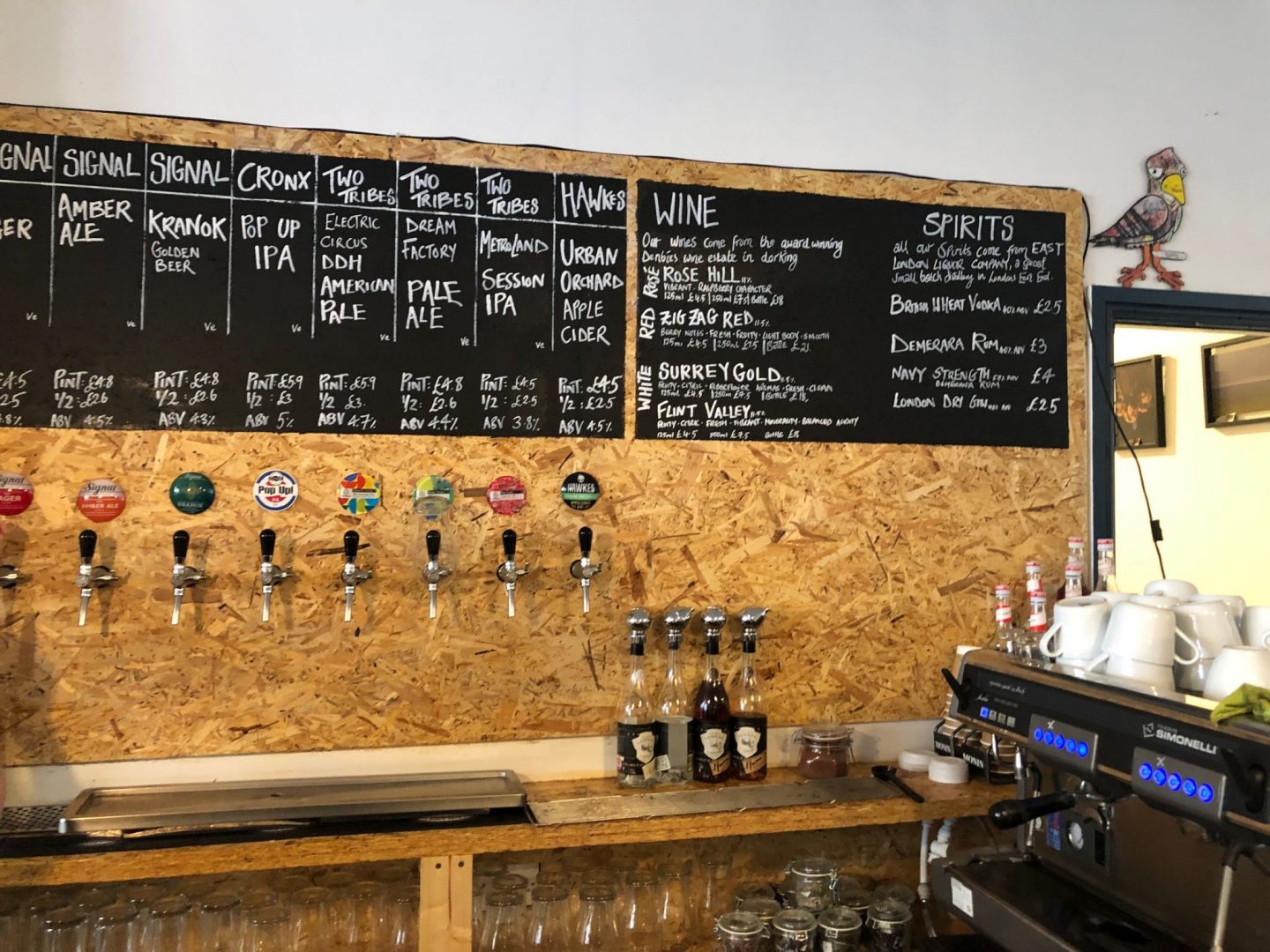 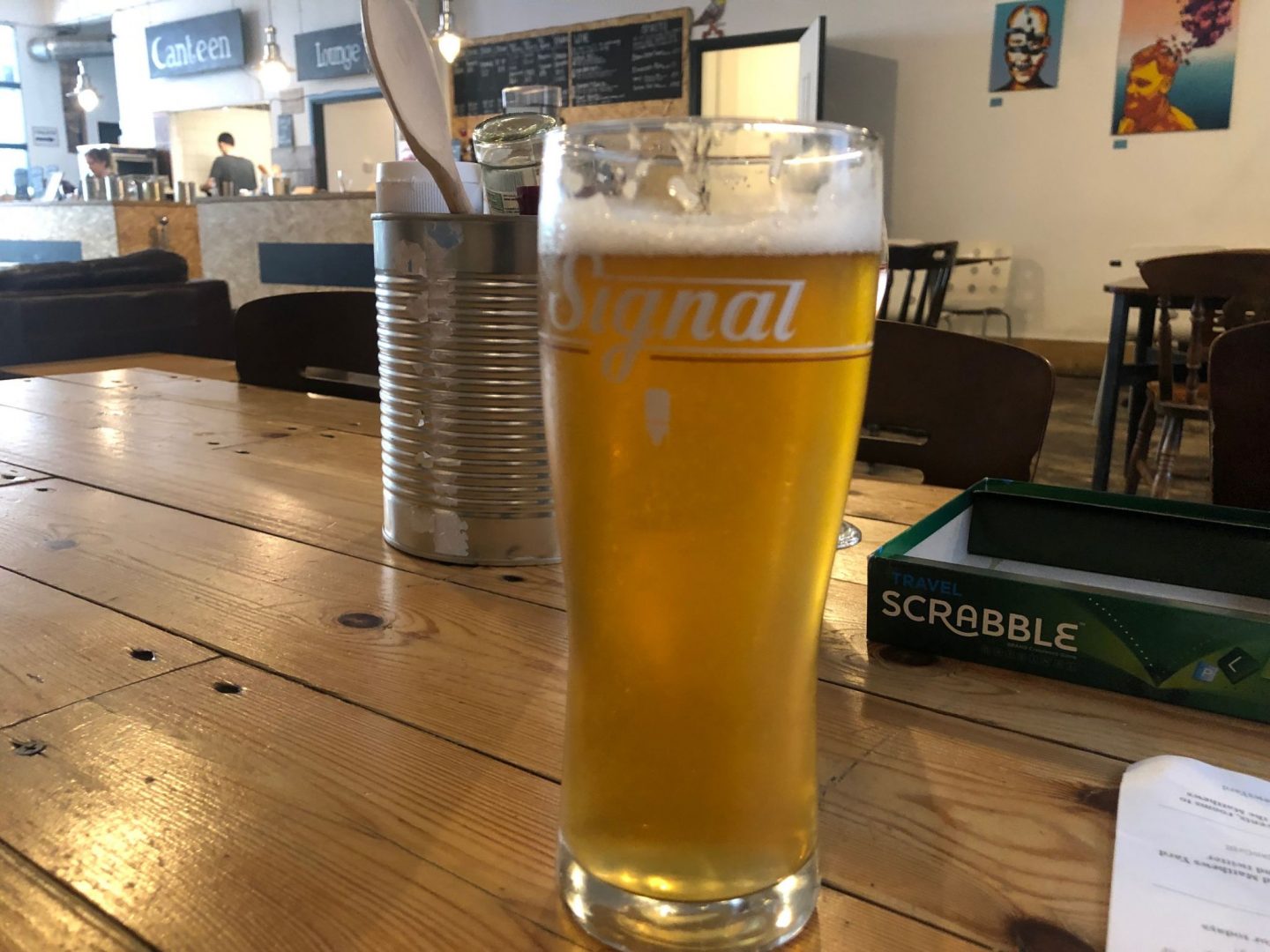 Signal lager with a malt base from a local brewery

There goes our time at Croydon’s Vegan grill. The staff were friendly and Ben the chef was knowledgeable about his ingredients and passionate about vegan dishes (in a positive way). I’m really glad we decided to eat here. My belly was full and I knew exactly where all the ingredients of my tasty brunch were sourced from. I plan to visit more vegan and vegetarian restaurants over time.  You need visit the Matthews Yard spot soon though as this fantastic community space will be demolished at some point to make way for a huge block of “affordable” flats. A petition signed by over 6,000 people wasn’t enough to save the place. Here’s to hoping this Croydon community hub and the Vegan grill thrives when they finally move away from Matthews Yard. Keep up the good work and thanks for showing this carnivore another way. 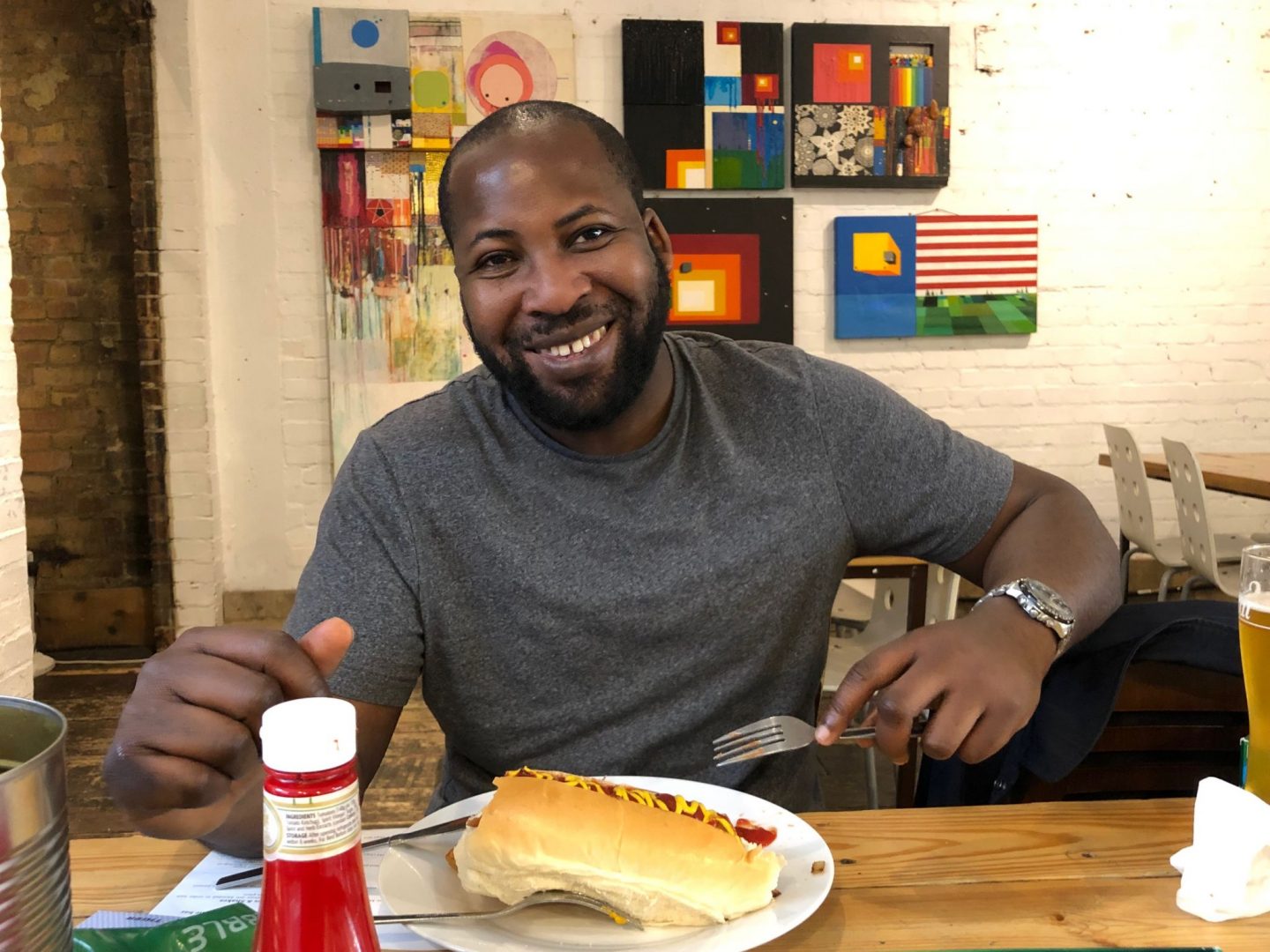