A casual debate with Diana, Martha and Tai about what restaurant to visit next as part of our foodie campaign ( we wanted to start a book /games club a few years ago, but realised it was easier just stuffing our faces) resulted in Diana suggesting Mayfair’s Stork restaurant. We quickly googled Stork and what popped up on the screen and got everyone curious about trying this place out was the West African and Eastern European fusion dining concept. This was uncharted waters , however with that said we all had an idea about West African fusion dining due to time spent at a restaurant in Piccadilly called Ikoyi London. I liked some of the dishes, however I wasn’t fully sold about the West African and Asian fusion dining idea. What fusion means to me is being able to taste something new but very familiar. A marriage that produces something fresh and inspiring from the best of both worlds. Not something that creates a King Joffrey. That said Ikoyi now has the coveted Michelin one star , so things must have improved right ? and people in general do seem to be buying into the fusion idea.

How does Mayfair’s Stork restaurant stack up when it comes to fusion and most important taste ? Well let’s find out.

We booked a table on Opentable for 4 for 6.30 pm and as predicted on Facebook I arrived at the restaurant first and Martha last. I even got Kostas the general manager to get a few victory snaps. A beautiful and eye catching entrance that screams Stork at every opportunity. This is a restaurant that wants to burn it’s name into your mind. 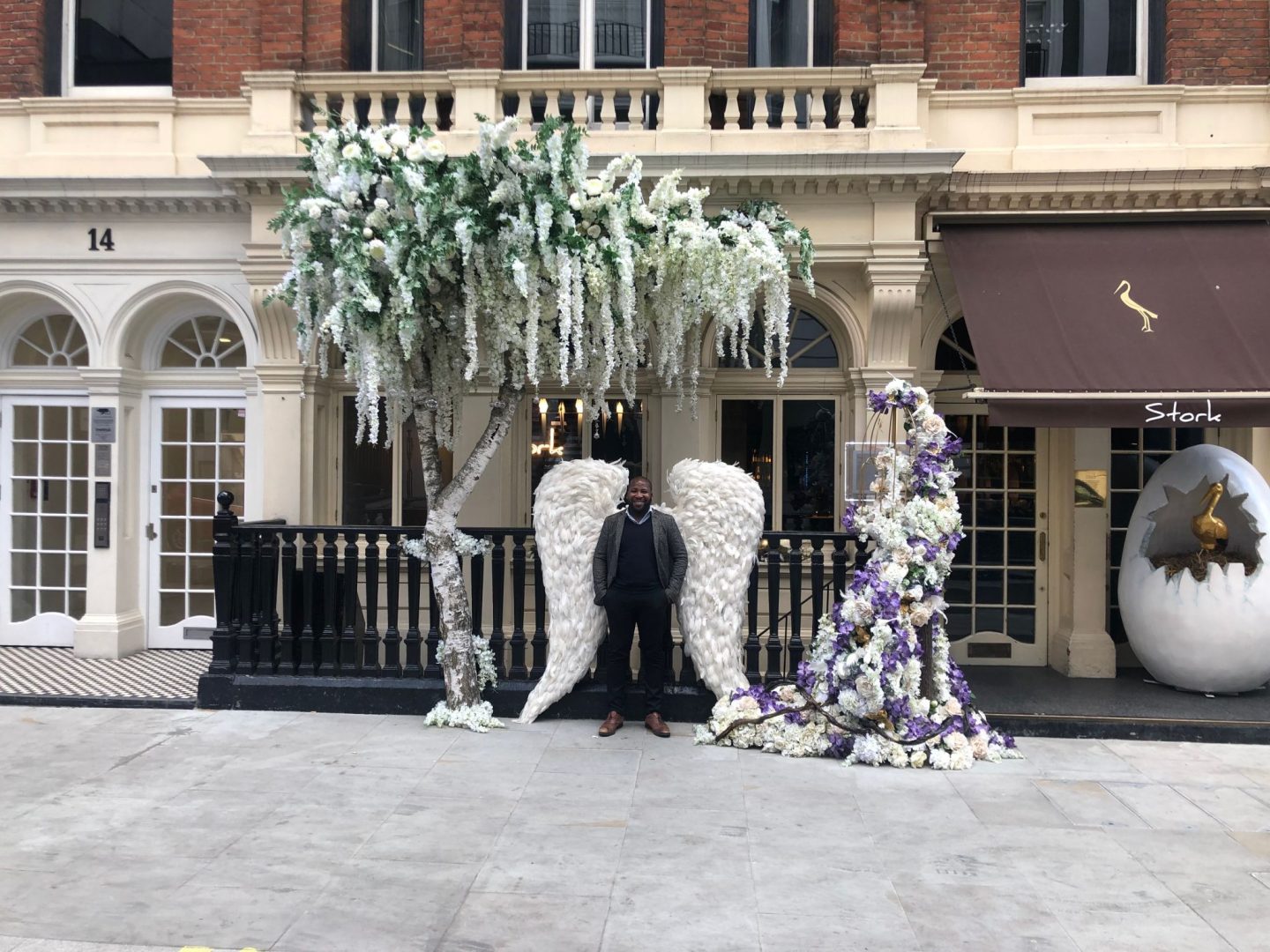 On entering the restaurant the decor was lush , but not oestantacious enough to make you feel uncomfortable. The marble top tables, comfy velvet chairs and light bulbs shaped like Storks was stunning. The Golden Storks and flowers in the women’s toilet will probably feature on many Instagrammers page for months to come

Why the Stork I asked Kostas ? He looked at me like he’d been waiting for me to ask that question for the past 30 minutes, summouned the spirit of Attenborough and then enthusiastically described Storks migrating from West Africa to Eastern Europe. By the time he finished..it all made sense and I was glad I asked. I also found out that the restaurant is owned by Michael Adjovi Kalu and Nadina Grigoras ( Nigerian and Moldovan ) and the head chef ( Adebola Adeshina ) used to work under giants of gastronomy such as Gordon Ramsay and Marcus Wareing.

On taking our seats we were offered a tasty non alcoholic butterfly syrup by a friendly waiter. Everyone was pretty much hungry so we ordered a few familiar looking dishes on the menu, starting off with the standard Jollof rice, Boli , a lamb suya dish , Halibut and efo riro , corn fed chicken breast , saddleback  pork loin , beef Susa and yam chips etc. We were hungry okay.

Show me the money

This restaurant has some good things going for it. The staff were very welcoming and attentive ,the atmosphere was buzzing with Nigerian music,  the venue over 2 floors was a thing of beauty and most of all they had some dishes that delivered on flavour and met the brief of West African and Eastern European fusion dining. I think they need to push out the boat a bit more and display their fusion concept by having tasting menus that really showcases more West African and Eastern European fusion dishes. I think a tasting menu’s definitely the way forward.

I will definitely keep an eye out for Mayfair’s Stork restaurant and visit again in a few months to try out more dishes. Keep up the good work Stork.I think you’re onto a winner with this concept.