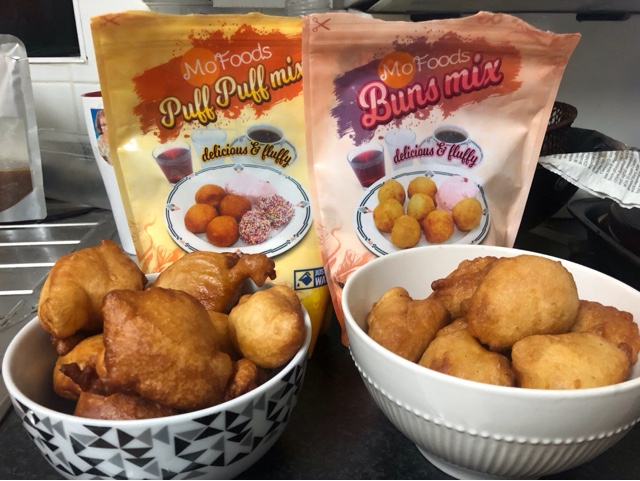 I opened my email one gloomy London afternoon and noticed one in particular that caught my eye. It was an email from Ariatu PR agency about a newly released Nigerian MoFoods Puff puff mix and Buns mix founded by Omolara Tayo-Sobajo in Derby (UK). For those of you who’ve never heard of Puff puff or buns before, these are popular West African deep fried dough snacks that tastes a lot like doughnuts. Most Nigerian parties have bowls of Puff puff or buns dripping in sugar strategically placed next to a malt drink on party tables. You find them at family gatherings, a small snack shared between loved ones ( or not shared, but kept in a cupboard awaiting their departure ) before demolishing a bowl of pounded yam and spinach  stew. They are also very popular roadside snacks sold in wooden boxes surrounded by glass. I actually remember getting a few of these wrapped in newspaper washed down with bottle of sprite during my lunch break as a kid. Thinking about it now those oily hands got me into trouble a few times and drew looks of dismay followed by a quick succession of well deserved lashes as I often wiped the oil on my textbooks. Reminiscing over, I smiled and agreed to review the mix as this was a snack close to my heart.

The box arrived a week after the email and on opening the box I was impressed with the brightly coloured packaging of the mixes. It looked fun and eye catching.

The recipe at the back of the package was very easy to follow. All you had to do was add water to the mix , stir, let it rest , then fry in hot oil. The only thing left was picking a time to review the mix as I was travelling a few days after their arranged arrival. I decided the best time to trial the new mix was at a family Christmas gathering. I was curious and nervous about the reception the snacks were going to get as my mum was also making her own Puff puffs. Mum makes pretty good Puff puffs and comparisons were going to be inevitable, but what better way to bench mark the products than to feed some tough Nigerians. 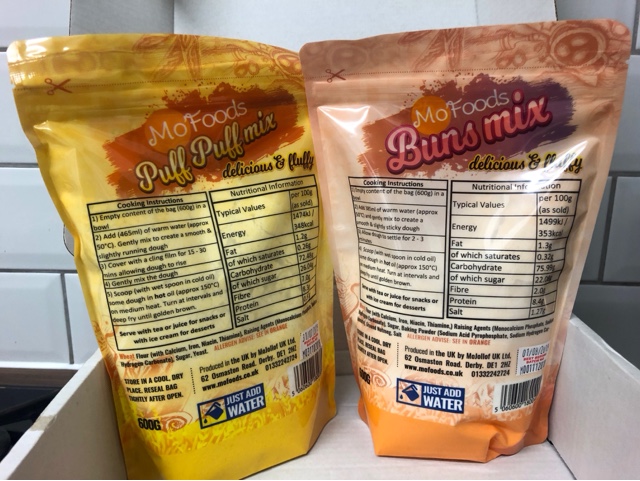 Here’s a small video I put together about making the mixes. The first thing my aunt remarked about was how very easy it was compared to fully making it from scratch. No need to measure quantities of flour, yeast, sugar and salt etc. You simply pour the mix into a bowl, add warm water , stir, let the dough rest (different times for both mixes) and scoop into hot oil for a few minutes.

This is the first time my aunty Jibike and I cooked together ( well she cooked and I shot the video by drawing inspiration from Steven Speilberg and other talented directors ) and it must be said that it was major fun. After making both mixes we gave the Puff Puff and buns to family for a taste test. I was relieved when they all said they loved it. The Puff puff had a light and fluffy texture , whilst the Buns were slightly denser. Some family members wanted to roll both in a bowl of sugar, whilst others thought it was sweet enough. I agree with the latter. The aroma was also on point. If I was forced to pick between both, I reckon the buns peeped the Puff puff in the taste test by a very small margin. That said, both were a massive success in my opinion as they managed to hit all the marks when it came to aroma , taste and texture. Even mum liked it “reminds her of her childhood” and that takes a doing as she’s our Puff puff expert.

A quick check of pricing on their website showed free delivery for all UK orders , with each bag of mix ( 25 – 30 dough ) costing £3.50 . A minimum of 3 posts are required for every order.  Very good pricing indeed with a few family members saying they would pay such a fee for a taste of home.

Congratulations to the MoFoods team. This was one review I thoroughly enjoyed. You won yourselves a future customer 🙂

Thanks Ronke ( Ariatu PR agency ). You had me at puff puff . 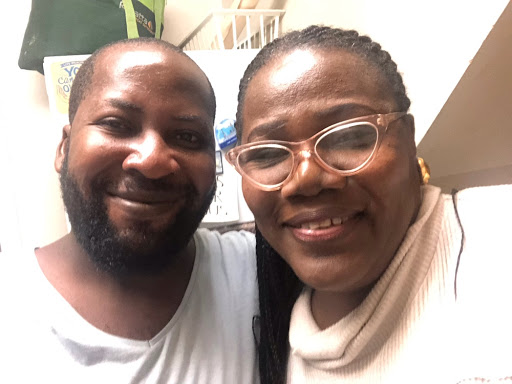