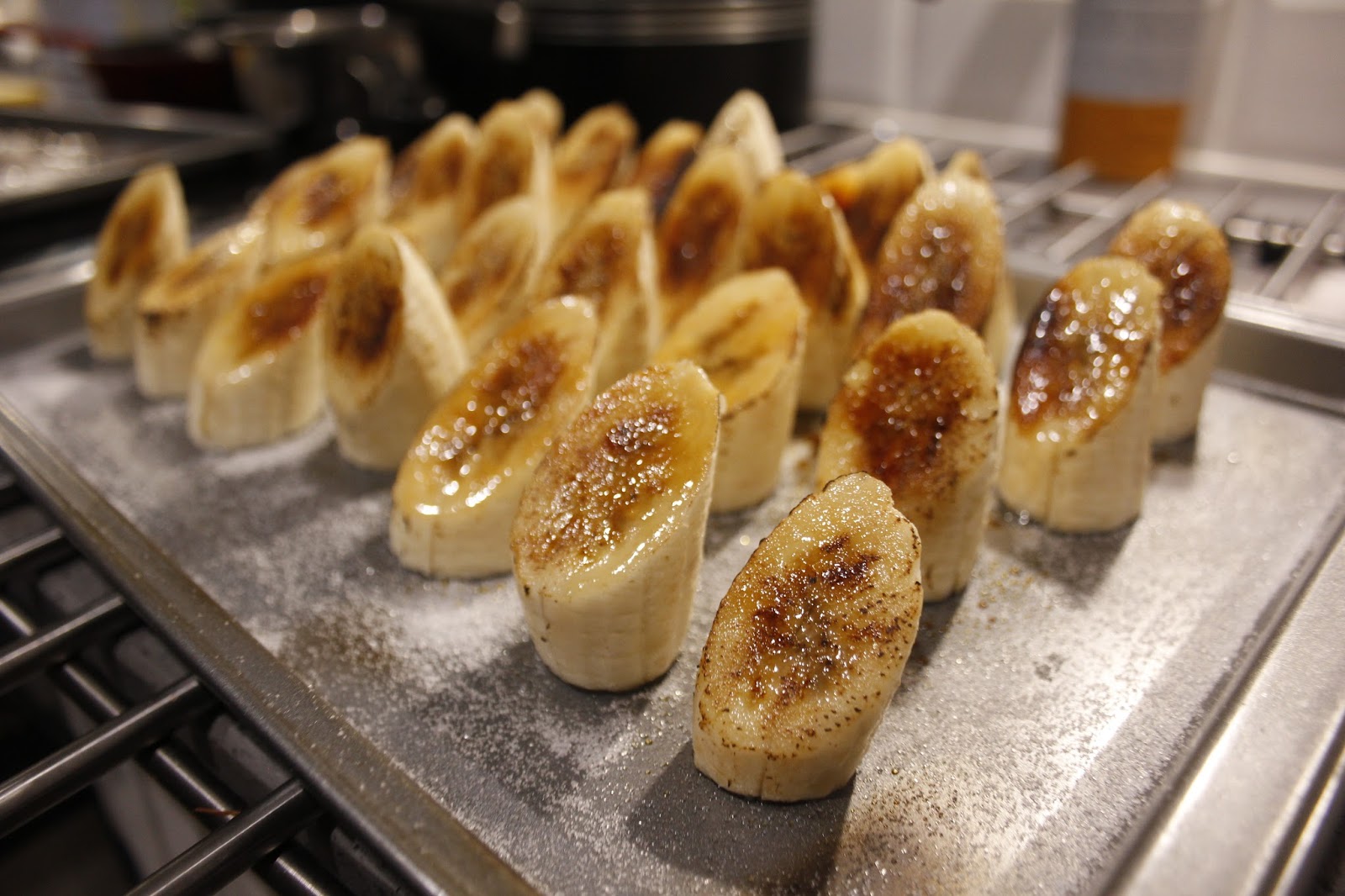 I received an invitation a couple of weeks ago while stuffing my face at a Jollof rice festival in Lagos, Nigeria. This invitation was from Tholani, the moderator of an African culture blog. The event itself was hosted by an up and coming chef called Victor Okunowo with a brief that involves us food lovers/bloggers critiquing his dishes prior to a planned Eight Course supperclub taking place in October called Ounje.

Now admitedly, I didnt know what to expect over the course of this tasting evening as have never had the pleasure of tasting any of Victor’s dishes, however the invitation email mentioned gastronomy and Nigerian dishes in the same sentence and while this peaked my interest , I had slight reservations courtesy of a fine dining evening a few weeks ago at a Nigerian fusion restaurant called Ikoyi London. They managed to stretch the flavours of Jollof rice, something soo sacrosanct into something bordering on blasphemous. They had some good things in their favour, but you can read my Ikoyi London blog post review to have a better idea of how that evening went.

Victor Okunowo’s private menu tasting evening at a flat in Romford was a far more positive and enjoyable experience. I had to get there for 6pm, so pretty much ran out of work like a bat out of hell. A hungry one at that seeing as I didnt have anything to eat all afternoon in anticipation of the evening. As it turned out I actually got to Romford at 5.25 pm after leaving work in Westminster a bit earlier than my normal closing hours (They owe me a few hours at work, so in case my bosses are reading this blog post I was just cashing in my cheque – Sorry Darren, Romford was calling). The flat was just a few minutes walk from the station, so I spent the next 20 minutes sitting down at the station figuring out how to use my canon SLR yet again. Most of my blog pictures are taken with my trusted Iphone 6 as I always feel a bit awkward bringing out a massive black cams in restaurants. But alas the brief said bring a camera and I thought bringing a damn SLR would make me look a bit more professional. A few minutes taking pictures of my watch , scheming through my brother’s photography website , while watching Youtube video’s about the best ISO and aperture settings and I was good to go.

Nigerians tend to have a timing issue , so on entering the flat I was pretty chuffed about getting there with a few minutes to spare. Victor Okunowo and his team of helpers were quite welcoming and a selection of drinks were offered once I settled down. Watching the way the team worked well together was nice to see. Soo much prep goes into an evening like this , all so calm and well planned out unlike my stressful experience hosting dinners. 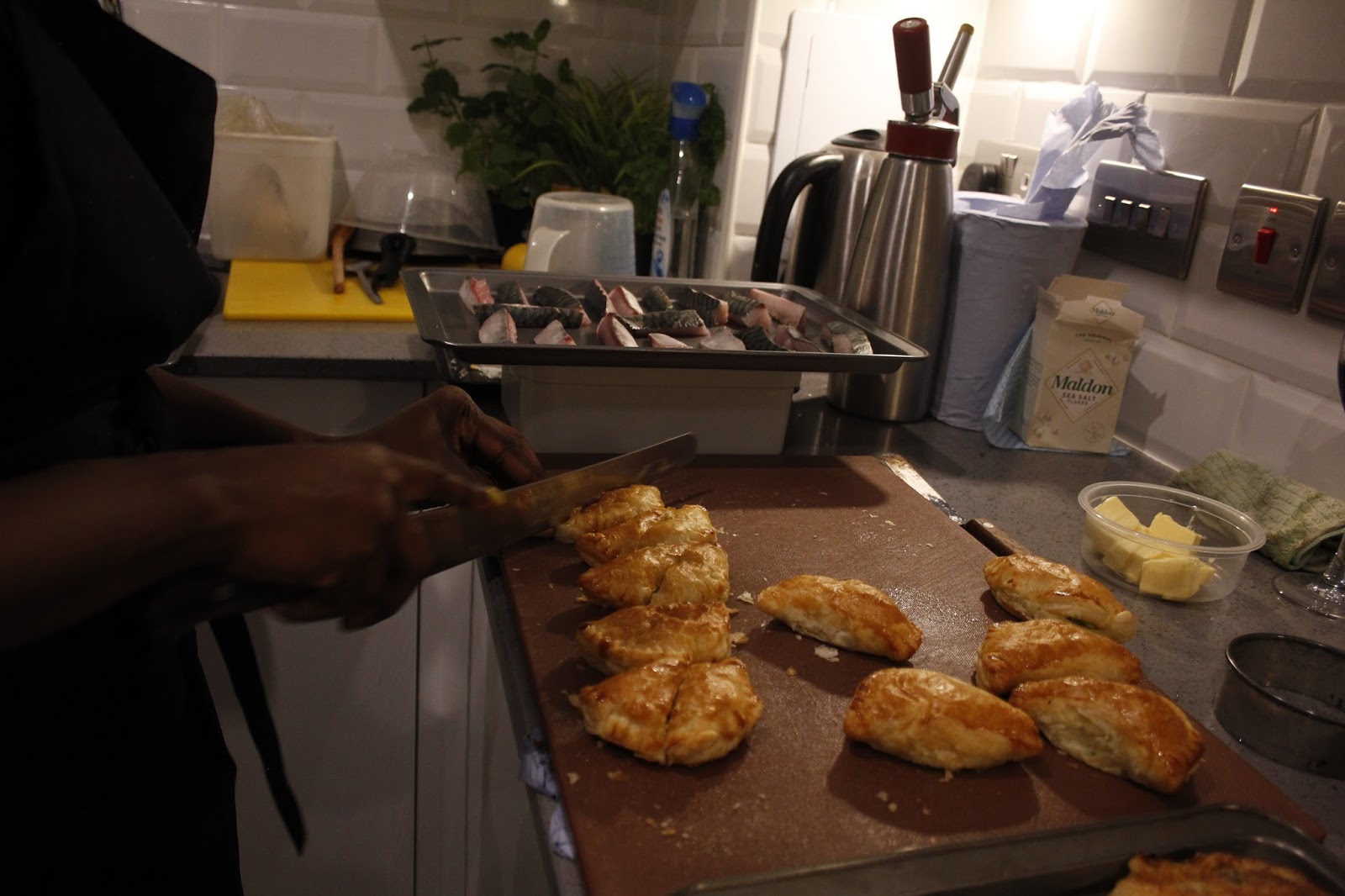 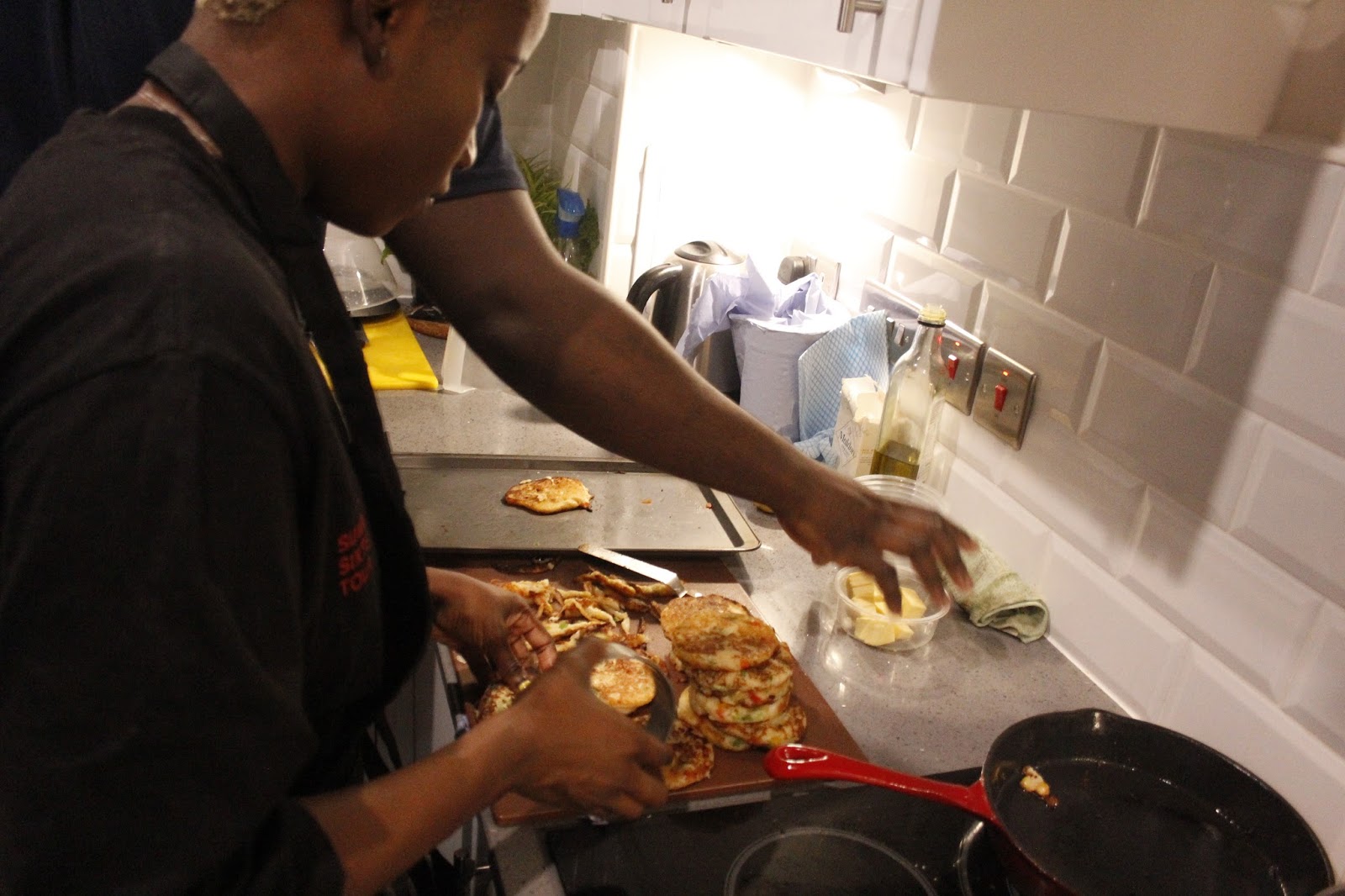 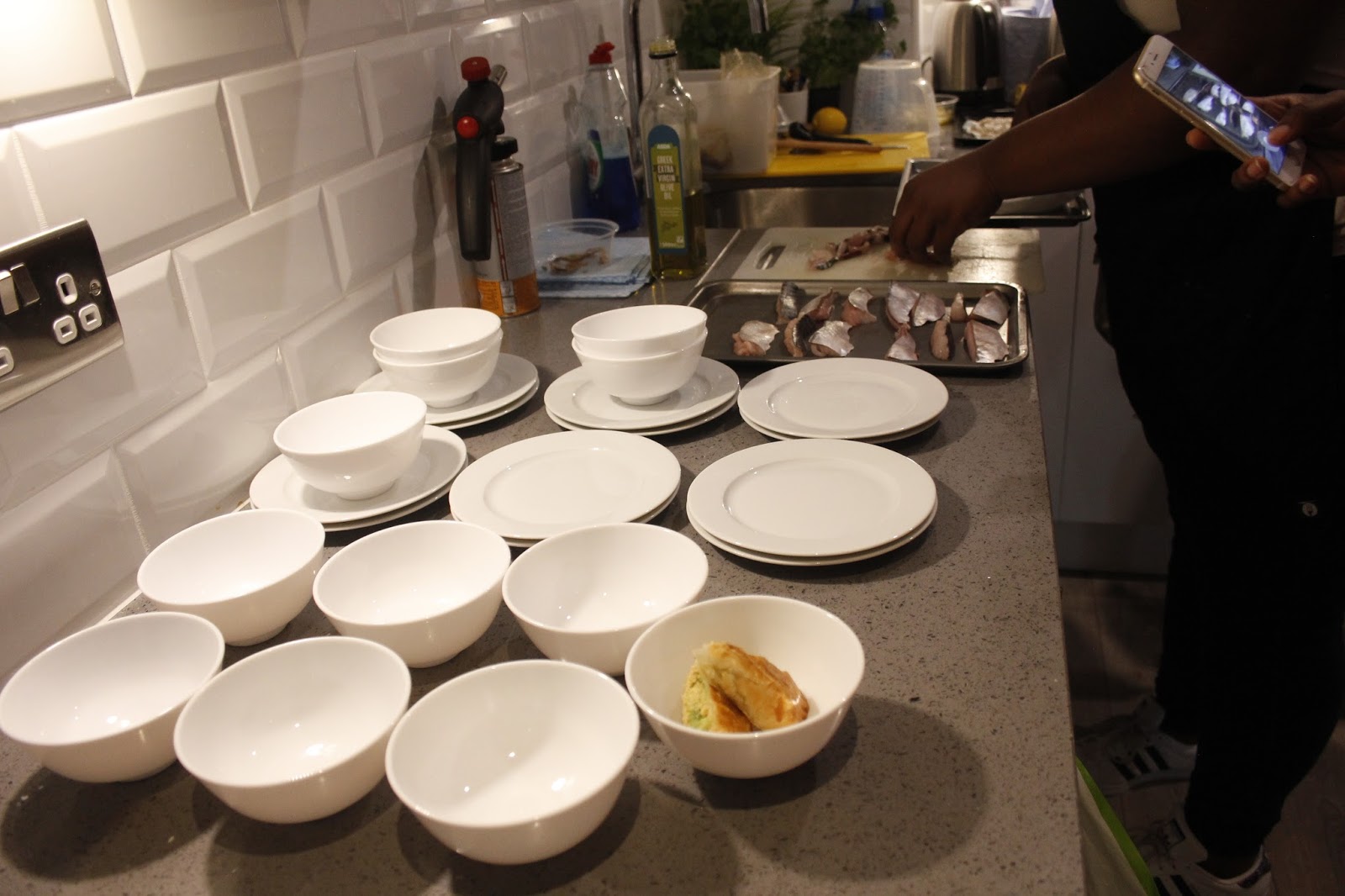 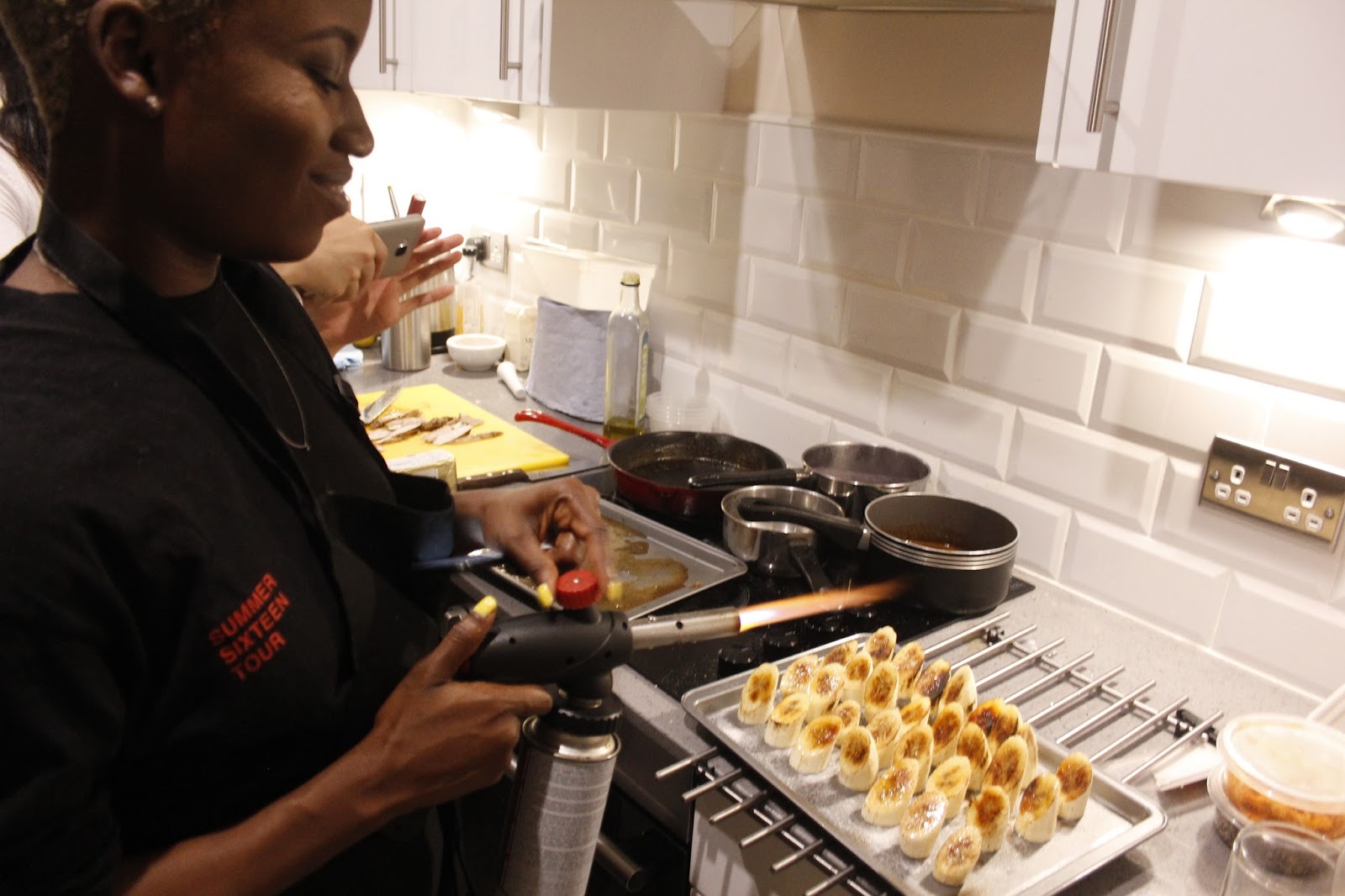 Other bloggers and food lovers arrived after a few minutes in the flat. I spoke to Lesley who apparently knew my brother through some of his photography work at various african events and carnivals. I knew we would get on when he said ” You mean you’re the older of the 2 brothers?”. Ronke Lawal of whosfordinner (always magically had a glass of red wine in one hand- she drank all the Shiraz) and Yolisa of YoYumTum (having a nightmare of a time with her SLR) were fun to meet and chat to through out the course of the evening. It was also a pleasure meeting Daisuki Smile,  Huy Phu and the owner of an event that happens once a month called Faaji sundays

Spending an evening with people who love food as much as you do is heaven for me. No one judges you when you pull out your cam to take pictures of food on the dinner table. I normally have friends screaming can we eat now for God’s sake, but tonight was certainly different. If anything I felt like I didnt take enough pictures. A few moments reminded me of those nature programmes, 10 hyenas surrounding an unfortunate animal who know’s he’s pretty much had it.  In this case the fortunate animal was Victor and luckily he had many exciting dishes on display to satiate our hunger for the perfect shot.

I saw passion in Victor’s eyes everytime he described each course. He seems like a man with many creative ideas , so much so he probably would have attempted a 10 course meal time permitting.  I thought the fact he thought of some of the nights flavour combinations a few hours earlier, impressive. So what did he come up with? well wait no longer

A sweet potato soup with coconut crunch/chips had to be swallowed as a shot. The thick soup was slightly sweet and quite creamy with the coconut chips adding a much needed texture. It needed a little spicy kick or something a little acidic to cut across the creamy sweetness, however that said I licked each drop because it was very moorish.

This was soon followed by a salmon and avocado pie that was inspired by Victor’s mum. Being a big fan of both salmon and avocado, liking this course was definitely on the cards. It reminded me of me of the meat pie’s I used to have in Lagos as kid, but just more refined . The pastry is tastier and lighter, the salmon wasnt overpowering , while raw onions seems to have been added for texture. I could easily eat a few of these in a seating. A few bloggers mentioned having this with a dip (maybe something slightly tangy and spicy ) and I can see where they are coming from, but personally I dont mind it like this actually. Give me a nice glass of white with this and am good. 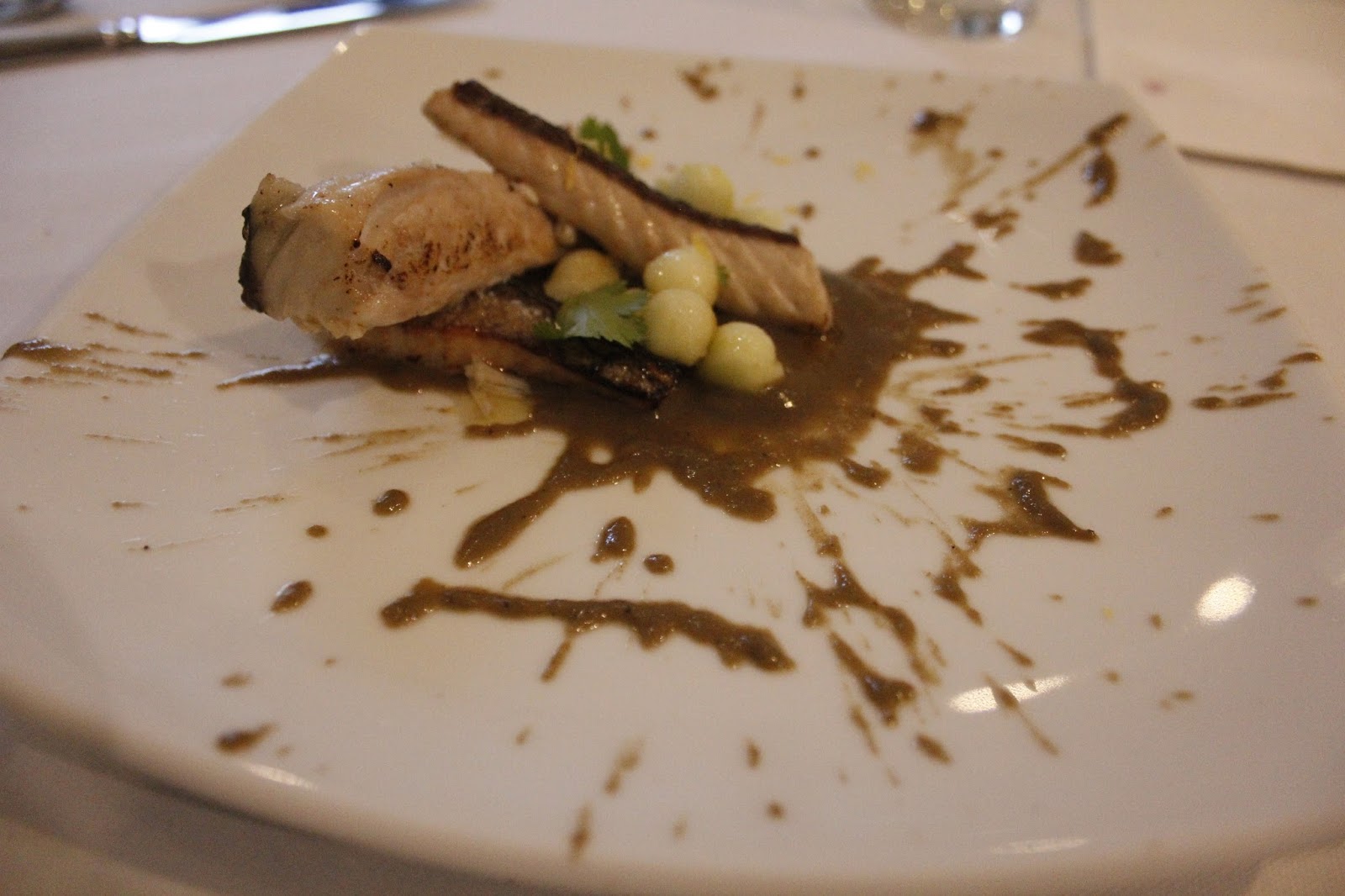 Akara pancake with sweet peppers, king prawns, spinach and palm oil dressing was tasty and spicy. Akara is basically a bean cake made with with white beans , rolled into balls and deep fried in a truck load of oil. This Akara was certainly different. It was shaped like a pancake, light, fluffy with actually no oil dripping down my face. Most importantly, it was tastier than any Akara have had previously. The dish emphasised some of the things I liked about Victors cooking, very good flavours underpinned with moorishness that makes you want to keep … how should I put this? well makes you want to keep on stuffing your face like a fat pig competing at a fat pig eating contest. 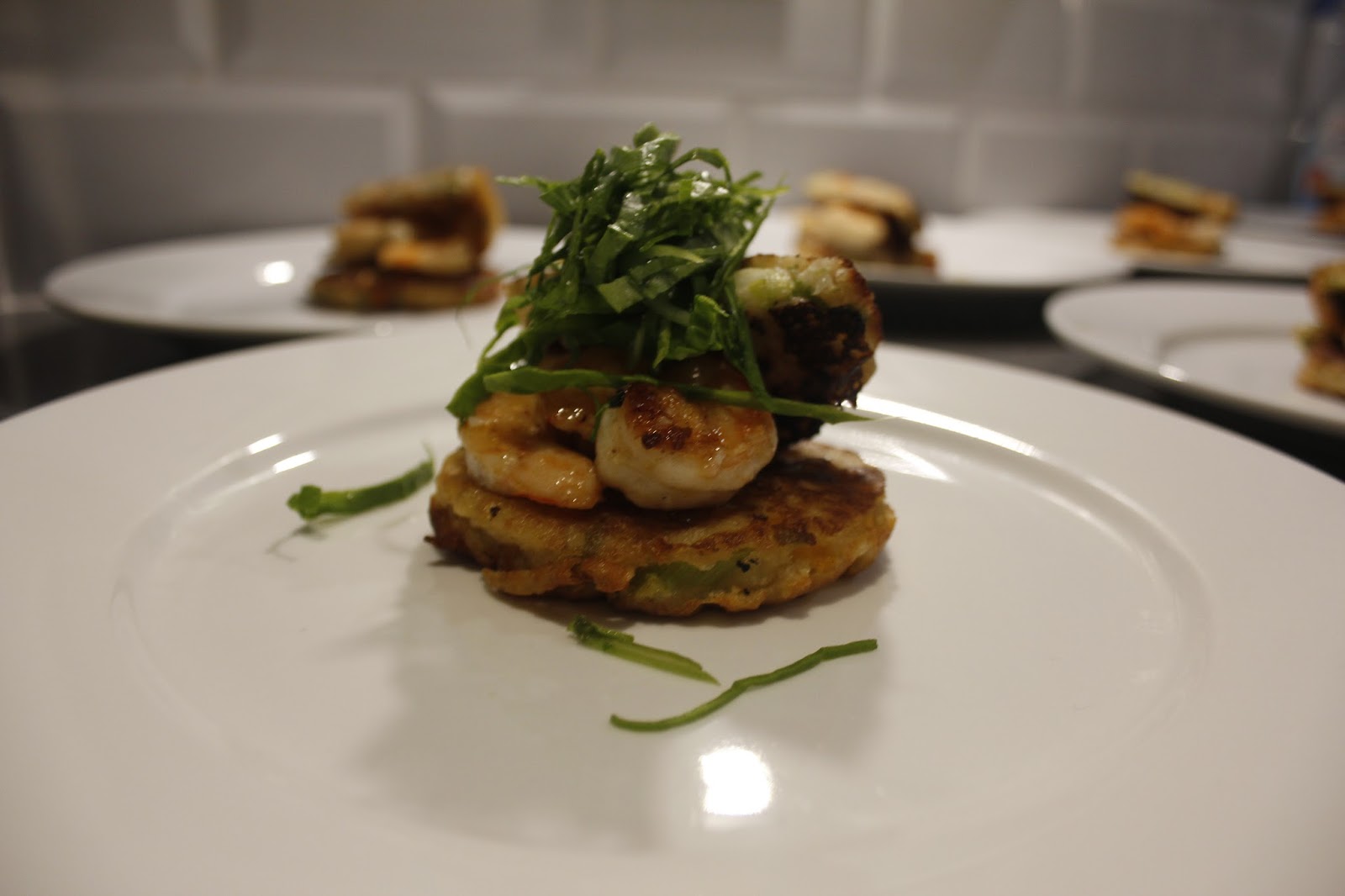 Fifth course was sous vide chicken breast with negro pepper, roasted okra and buttercorn. The breast chicken on this dish was one of the most succulent pieces of chicken have had in while. Every element in this dish worked. The sweetcorn added a slight sweetness to the juicy chicken and the stickiness of the Okra made the chicken juicier still. All this was brought together by a negro pepper sauce (I want the nigerian readers to think pepper soup and for non Nigerian to imagine a slightly fragrant and spicy black peppercorn sauce) that added an extra dimension to the sweetness. This dish was simple, yet extremely tasty. Maybe my favourite of the night, next to the Supermalt ice cream dessert.

Braised short ribs with onion puree , onion powder and baby onions , spiced beef jerky and yajii sauce was slightly spicy with ribs that were just a bit too well done.  Now not everyone will have an issue with this as many Nigerians love their meat boiled, fried, boiled and fried once more until we can see the animal’s soul waving back at us for good measure. I love my meat medium rare , soft and slightly fatty. After having such a light chicken dish previously, the spiciness of the meat dish packed a bit of a punch. I was able to handle it, however one of the bloggers (Daisuki – smile) had beams of volcano shooting out of her eyes while chewing on the small morsels of meat. I think i saw tears at one point and had to get her a glass of water. Once again, I finished my plate, even if i did think it needed a bit of a tweeking. I wouldnt mind seeing the chef’s new take on this dish at all. I hope he keeps it actually. 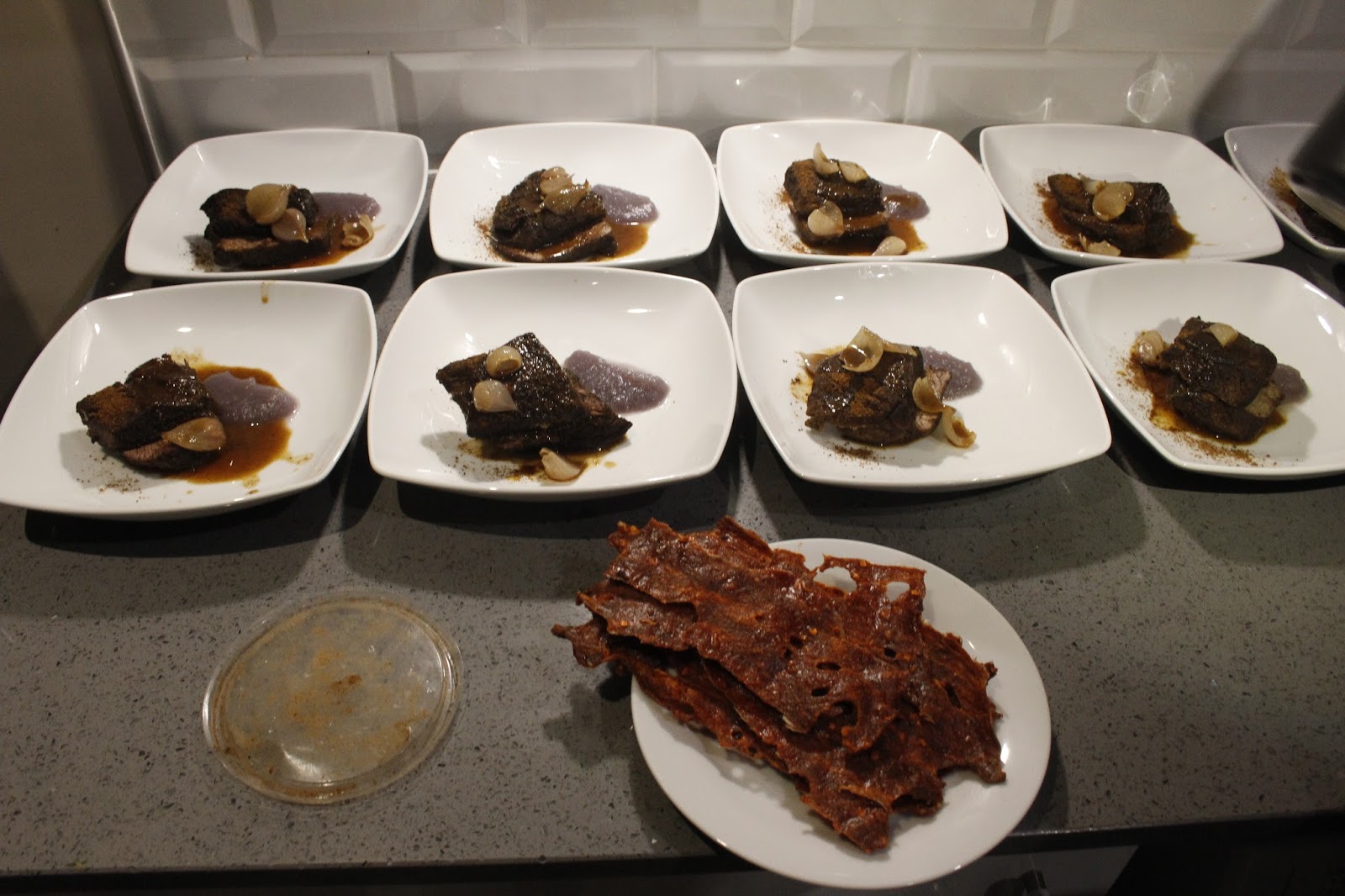 The ribs was soon followed by a hibiscus and mixed berry sorbet with soured oranges. A few words come to mind when having this palate cleanser. Tart, citruisy, sharp and Tart. This was the perfect follow up to the spicy rib dish.  The tartness of this sorbet definitely helped to clear the taste buds due to it’s acidic sweetness. Cleanser over, it was now time to have the wonderful torched banana and ice cream dessert.

Flame torched banana, spiced sponge , chin chin crumble that added some crunchy texture with bursts of flavour , supermalt ice cream and malt whiskey glaze. What do you get when you combine those flavours? Well for those of you old enough, you get a when Harry met sally restaurant moment. This was pleasure on a plate. Daisuki , Yolisa and Ronke all closed their eyes and hummed while eating this.We actually had another bowl of the ice cream before we left the flat. It was really that good. 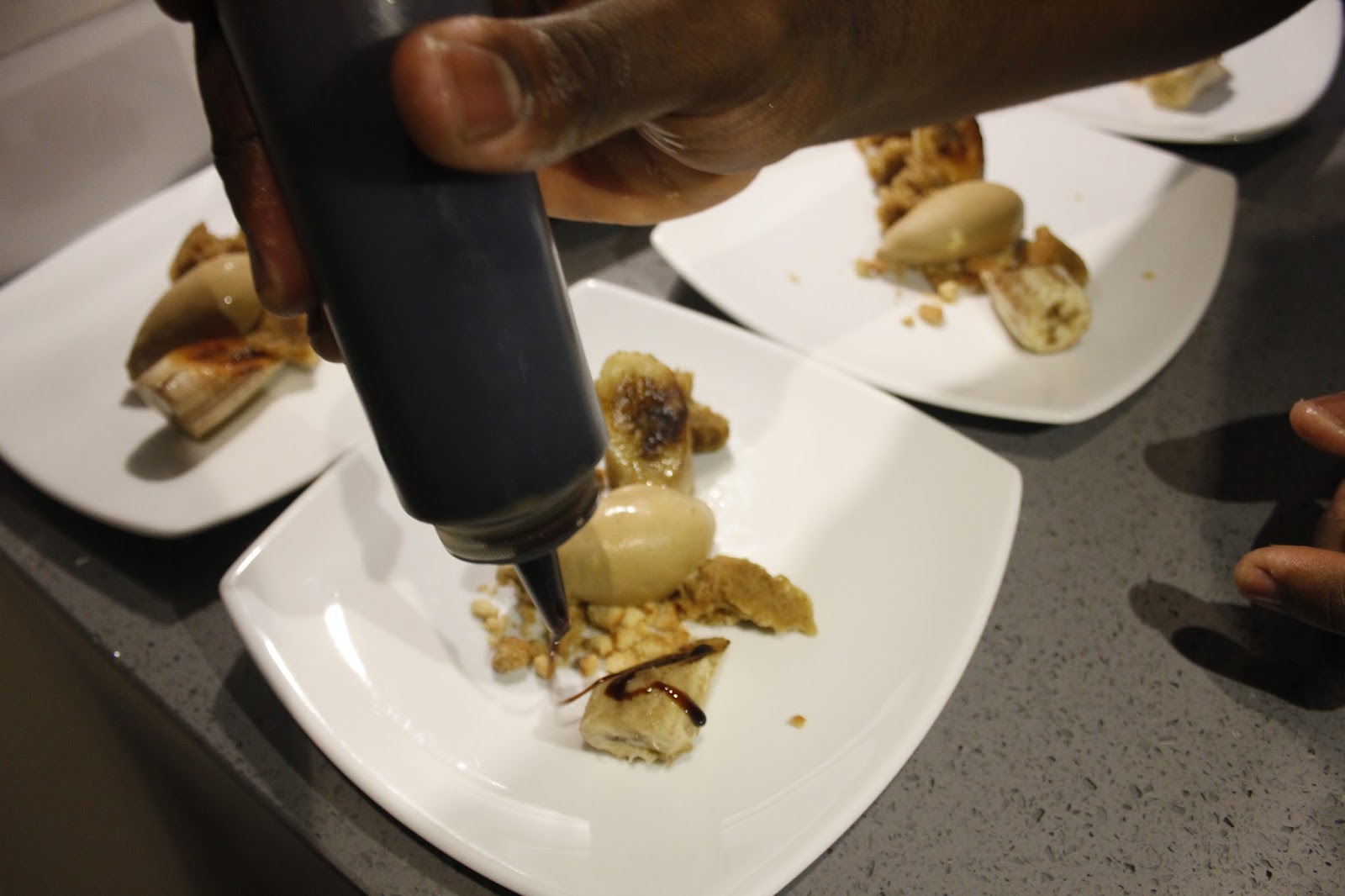 There goes my time at this private menu tasting event. The Ounje event happening on October the 8th is meant to be even better, as such I cant wait to see what the Chef brings to the table. On the evidence of what I had over the course of the evening, this event will definitely be a success.

Compliments to the chef and his merry band of helpers who made the course eight course possible.  Tons of good food and nice people made this evening one of the highlight’s of my week.

An update since I last wrote this piece about Victor Okunowo. He is now aMasterChef Professionals Semi Finalist having produced dishes rated highly by Marcus Wahreing and Monica Galetti. I’m glad to see his hardwork and talent pay off.  Victor is now based at the Talking Drum restaurant.  I have my tickets booked already…Do you? 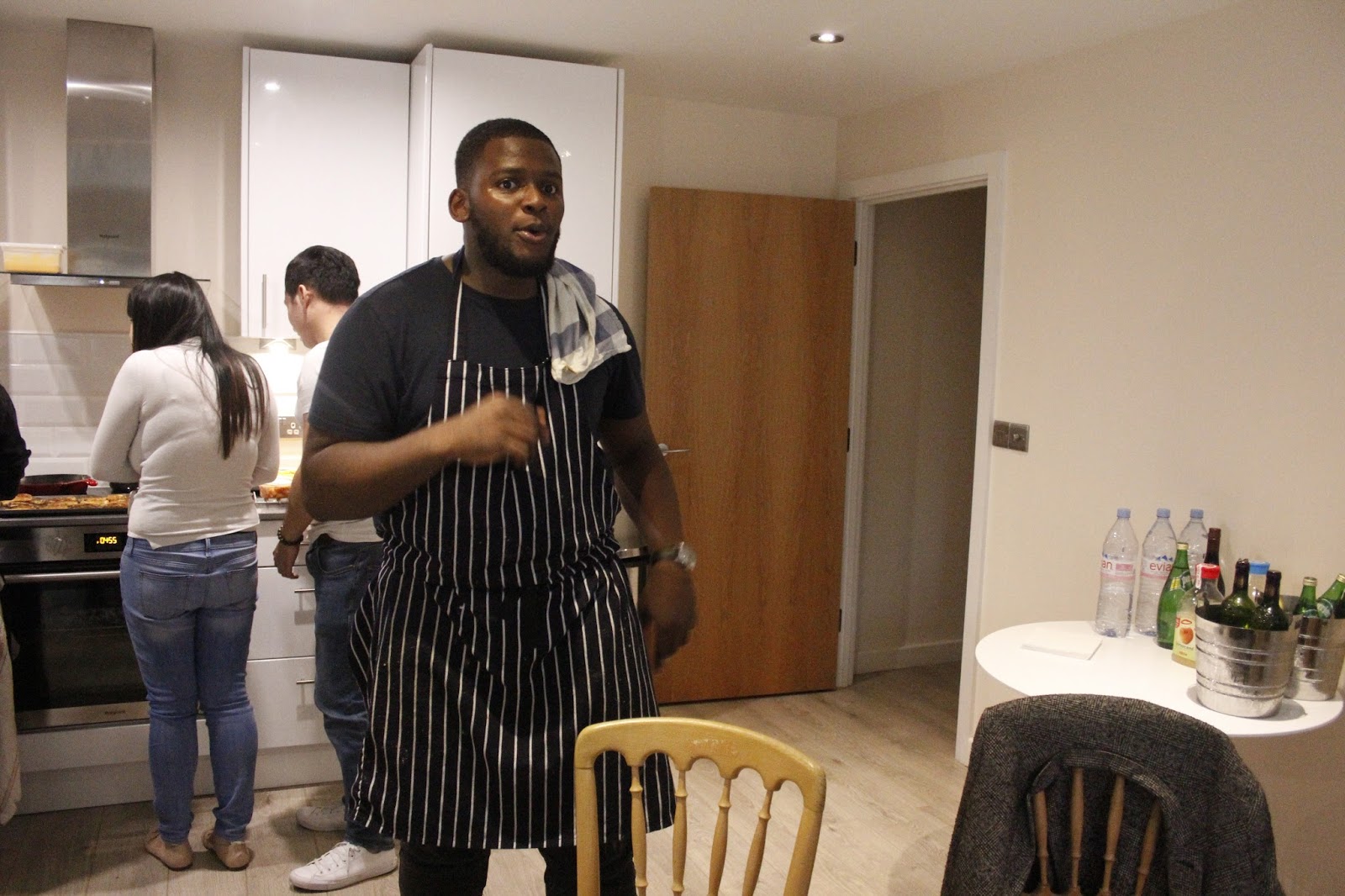 See you soon and am thinking of writing a blog post about Nigerian VS ghanian Jollof rice wars at some point in the coming weeks. Look out for it.