There are good days to book a half day at work and bad ones. It’s London and as such most half days are ruled by apocalyptic rain that makes you want to stay at work followed by hail stones for good measure, just in case you got ambitious and believed the weatherman. Today was one of those good days and what better way to celebrate than to look for rooftop bars. What’s the point of working hard if you can’t even enjoy a bottle of prosecco and some roast pidgeon in very good company on days like this.

The first point of call was a rooftop bar on the 6th floor one New Change called Madison, followed by Sushisamba in Liverpool Street.We spent only a few hours at Madison’s, however looking back now it should have been more. The views were definitely impressive with St. Paul’s cathedral looming on the London skyline. A perfect back drop for drinks if ever there was one.

The decor inside the restaurant was pretty slick and modern with dark sofas and wooden chairs, tons of lighting surrounded by glass all around so you get to enjoy views of St. Paul’s on the inside as well.

The dishes we had was quite tasty . The smoked and confit duck salad with fresh pomegranate, dandelion leaves , soy dressing and sesame seeds was quite refreshing and actually filling. The soy and sesame seed combination were the 2 most stand out flavours. The price I hear you ask? Well it was £9 for a small plate and £15 for the larger option. We also asked for a side of truffle chips.

The desserts came soon after and I have to say that this didn’t disappoint. The chocolate and praline fondant , had a perfectly gooey centre that made you almost lick your plate a few times over. It paired well with the butternut squash, vanilla purée and milk ice cream.

The bill which  came up to about £134 combined and includes a £41 bottle of prosecco and 2 cocktails, isn’t the cheapest in the capital, but relatively competitive especially when the views are factored into the equation

A few hours later and it was time for Sushisamba, our 2nd rooftop choice. Luckily it’s a short trip on the central line from St Paul’s to Liverpool Street Heron’s tower so we were there in 15 odd minutes. One of the first things that gets you is the lift speed and views as you head up to the 38th floor. 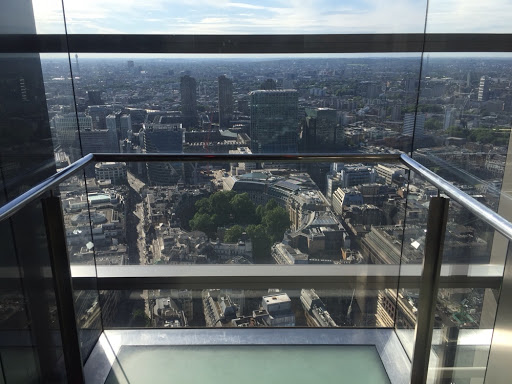 The roof top terrace in the restaurant has a pretty glowing tree right in the centre. Thinking about it, it’s not too different from that tree the northern folks worshipped in Game of thrones. The only difference is the fact that it’s surrounded by a bar with copious amounts of alcohol, whilst the one in game of thrones often gets shown prior to some sinister scene taking place. The terrace itself has limited space unlike the rooftops of Madison, so finding a free seat might not be easy, however it should be said that this wasnt a problem.

We ordered 2 samba rolls on the menu, the first being a California Maki which consisted of snow crab, Cornish brown crab, cucumber, avocado, sesame, Japanese mayo and truffle oil. Overwhelming taste of crab aside, which is totally fine, there was nothing dynamic about the flavours or the textures of the roll. The samba roll was a bit lacking and to be honest if you told me it was preboxed from Itsu, I wouldn’t be surprised. Not that am having a go at Itsu, however more needs to be done for that price (£11.00).

On the other hand their Tiger Maki roll which consisted of takuwan ( Japanese pickle made from radish ) wasabi, tobiko, crab meat, tempura prawn, tiger prawn, wasabi mayo,beetroot yoghurt and unagi tare was delicious. It had the right  texture coupled with multiple flavours, one of which was the sweet-savoury taste of the unagi tare. This set us back , £16 however I don’t mind paying extra if it delivers on taste, something which this roll did in bucket loads.

There goes my evening at Sushisamba and an end to the days roof top adventures. A good way to spend the afternoon without a doubt. See you soon and i hope to check out a few more roof top bars in the future.